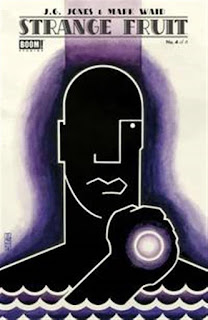 Published by BOOM! Studios, Strange Fruit was a four-issue comic book miniseries released in 2015 and 2016.  It was the creation of two acclaimed comic book creators.  The first is J.G. Jones, the co-creator of Wanted (with Mark Millar) and the cover artist for the Vertigo comic book series, Y: The Last Man.  The second is Mark Waid, a long-time comic book writer and editor.  Waid is known for the creation of the DC Comics miniseries, Kingdom Come (with artist Alex Ross) and for writing two acclaimed runs on Marvel Comics' Daredevil.

In a publicity release, BOOM! Studios described Strange Fruit as “a deeply personal passion project.”  The release also said that the comic book was a “provocative examination of the heroic myth confronting the themes of racism, cultural legacy, and human nature through a literary lens, drawing from Southern folklore and tradition.”

Strange Fruit is set in and around Chatterlee, Mississippi in April 1927.  At this time, the “Great Mississippi Flood of 1927” would occur.   As the story begins, the Mississippi River is rising, threatening to break open the levees and destroy Chatterlee, as it has already done to other “God-fearing” towns.  The race to shore up the levees is also threatening to break open the racial and social divisions of Chatterlee and the surrounding area.  Into this roiling situation, a mysterious Black man falls from the sky.

As Strange Fruit #4 opens, some of the local White people have come to see the mysterious Black man as useful, although the local Black community has already greeted his arrival as a sign of divine intervention.  Nicknamed “Johnson,” by Sonny, the young “agitator,” the stranger begins to really show his super powers, and attempts to use a strange device to save the town and the people from the flood.  However, there are still some racist White people who want to kill Johnson and other Black people even as the rising water threatens their very own lives.

In my review of Strange Fruit #3, I mentioned one of my all-time favorite novels, Stephen King's masterpiece, 'Salem's Lot (1975).  One of the elements of the plot that I thoroughly enjoyed was how the people of Jerusalem's Lot (or 'Salem's Lot, for short) blithely carried on their petty conflicts while darkness slowly enveloped their town.  That is Strange Fruit #3 and #4 in a nutshell.  Even the behemoth threat that is the flooding Mississippi River cannot completely draw people away from their mistrust and racial strife.

This is truth in J.G. Jones and Mark Waid's storytelling.  They convey the brutal strength and ugly power of hate with honesty; even with salvation or death by drowning practically shoved in their faces, some of the White people still have to hate and oppress Black folks.  I have said this before and it bears repeating:  Strange Fruit is not a screed against racism; rather it is an amazingly human tale that is genuine in its portrayal of the nature of man.

J. G. Jones produced some of the most beautiful comic book art for Strange Fruit that I have ever seen.  His depiction of the human face and its myriad expressiveness is a sight to behold.  The grace of the human in clothing and costume shines through even when the characters are being less than graceful.

Strange Fruit was one of 2015's best comic books and is one of the best of 2016.  It never received any Eisner Award (for excellence in comic books) nominations.  Wow!

Posted by Leroy Douresseaux at 5:30 PM