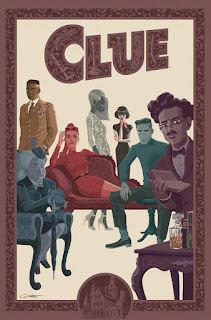 Clue is a murder mystery board game that was created in England and was first manufactured in 1949.  It is currently the intellectual property of Hasbro, the American game and toy company.  The object of the game is to determine who killed “Mr. Boddy,” where the murder took place, and what the murder weapon was.  Game players assume the role of the six suspects.

IDW Publishing, which has the license to produce comic books based on many Hasbro properties, published a six-issue miniseries based on the game, entitled Clue (of course).  Clue #1 to 6 (June to November 2017) was written by Paul Allor; drawn and colored by Nelson Daniel; and lettered by Neil Uyetake and Gilberto Lazcano.  In February, IDW collected the miniseries in a full-color trade paperback that reprinted the entire story, with bonus pages and the series' regular and variant covers.

Clue is set on a dark and story night... in and around the isolated, stately manor of Mr. Boddy.  There, Boddy is throwing a special dinner party, and his butler, Upton, welcomes the guests, a prestigious and celebrated, if not conniving lot.  The male guests are Colonel Mustard, the war hero; Professor Plum, who is always the smartest and dumbest person in a room; Nicolae Martin “Mister” Green, hedge fund manager and “pharma bro;” and Detective Ochre, who is also a grandfather and a gardener.

The female guests are Senator White, who is a politician and a CEO; Dr. Orchid, the toxicologist; Miss Scarlet, the rapper from Australia; Mrs. Peacock, the widow and aristocrat; and Detective Amarillo, a jogger and a cellist.  One of them is going to kill Mr. Boddy, but when the lead suspect turns up dead and murdered shortly afterwards, everything is thrown into confusion.  Add a mysterious flower, “Surobi Zinnias,” and readers have a murder-conspiracy with enough twists and turns to leave more people dead and even more under suspicion.

IDW Publishing sent me a review copy of the Clue trade paperback.  I was not happy to get it, honestly, because I was not really interested in reading it.  I had thought about picking up an issue of the miniseries during its run last year, but passed on that.  Of course, when I did finally get around to reading Clue I enjoyed it.

I believe that Mel Brook's two most famous films, Young Frankenstein and Blazing Saddles, are successful because they both look like and work as the film genres of which they are spoofing – “Universal Monster” movies for the former and Western films for the latter.  Clue works as a spoof of the murder mystery genre because it is indeed a murder mystery comic book.

I found myself racing through much of this trade paperback, trying to find out how many whodunits there actually were.  Writer Paul Allor pulls off a nice spoof of the cozy, murder-mystery genre.  It is witty and funny, but Allor also makes the readers interested in the mysteries, chasing the killers and their conspiracies across the narrative.

Artist Nelson Daniel draws an exciting story, and he makes each character visually unique, which is important in selling the idea that each character has his or her own story and/or something to hide.  I find that Daniel gives the characters an odd sense of constantly being annoyed, a sense of entitlement, that nothing should be in their way.  I guess that is what makes their motivations seem genuine.

By the time I finished reading Clue, I wanted more. There are a few sequences that seem unnecessary, but overall the comic book is strong.  I think that this is reason enough to recommend this to comic book readers looking for something offbeat.


Posted by Leroy Douresseaux at 5:28 PM