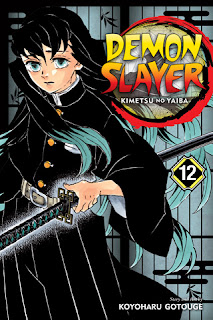 Demon Slayer: Kimetsu no Yaiba is a Japanese manga series written and illustrated by Koyoharu Gotoge.  The manga was serialized in Weekly Shonen Jump from February 2016 to May 2020.  VIZ Media has been publishing an English-language edition of the manga as a paperback graphic novel series under its “Shonen Jump” imprint since July 2018.

Demon Slayer is set in Japan's Taisho era (1912 to 1926).  It focuses on Tanjiro Kamado, a kindhearted boy who sells charcoal in order to support his mother and four siblings.  After one particularly taxing trip to sell coal, Tanjiro returns to his home in the forest and finds his family slaughtered.  He discovers that a younger sibling, his sister Nezuko, has herself been transformed into a demon by the unknown demon that killed his family.  Tanjiro becomes a Demon Slayer in order to find and destroy that demon, Muzan Kibutsuji.

As Demon Slayer: Kimetsu No Yaiba, Vol. 12 (Chapters 98 to 106; entitled “The Upper Ranks Gather”) opens, there is trouble in the demon world.  With the death of the “Upper-Rank 6” demon, Gyutaro, and his younger demon-sister, Daki, for the first time in 100 years, the upper ranks of Muzan Kibutsuji's “Twelve Kizuki” are not full.  So Kibutsuji sends the remaining upper-rank demons on a mission, but what is that mission?

Meanwhile, Tanjiro has regained consciousness after being unconscious for two months because of the injuries he sustained in the battle against Gyutaro.  While he recovers, Tanjiro travels to the mysterious and hidden “village of the sword-smiths” in order to get his damaged katana repaired by Haganezuka, the man who forged the sword.  But once Tanjiro is there, he has strange experiences.

THE LOWDOWN:  The Demon Slayer: Kimetsu No Yaiba manga has become one of my favorite graphic novel series.  It is, however, hard to keep up with the series as VIZ is currently publishing it on a monthly basis.

Demon Slayer: Kimetsu No Yaiba Graphic Novel Volume 12, like Vols. 7 to 11, is among the series' best entries.  Creator Koyoharu Gotouge ended a long and intense story arc in Vol. 11, but readers will find themselves right back at the beginnings of another mystery.  Simply, put Demon Slayer is a joy to read because Tanjiro's struggle continues in a way that makes for great reading.

John Werry's translation and Steve “Stan!” Brown's English-language adaptation deliver an engaging read, as always, that brings out all that is alluring about Demon Slayer's characters.  With this new mystery, the allure is as strong as ever.

I READS YOU RECOMMENDS:  Fans of demon-fighting heroes will want to read the Shonen Jump title, Demon Slayer: Kimetsu No Yaiba.

Posted by Leroy Douresseaux at 5:17 PM