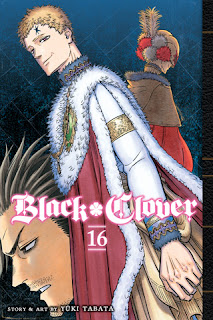 Black Clover is a Japanese manga series written and illustrated by Yuki Tabata.  It has been serialized in the manga magazine, Weekly Shonen Jump, since February 2015.  VIZ Media has been publishing an English-language edition of the manga as a paperback graphic novel series under its “Shonen Jump” imprint since 2016.

Black Clover focuses on a hopeful boy named Asta.  He and his friend, Yuno, are found abandoned in the village of Hage of the Clover Kingdom.  Asta dreams of one day being the “Wizard King,” the greatest mage in the land.  He has one big problem; he can't use magic.  When he is 15-years-old, Asta receives the rare “five-leaf-clover grimoire” (a book of magic), which gives him the power of anti-magic.  Can Asta become the Wizard King without being able to use magic, and is he worthy of being in the “Magic Knights” squad, “the Black Bulls?”

As Black Clover, Vol. 16 (Chapters 141 to 150; entitled “And End and a Beginning”) opens, both Asta and Yuno are members of the newly formed and elite “Royal Knights” brigade.  Both are now on their first mission, storming the based of the “Eye of the Midnight Sun,” which conspires against the Clover Kingdom.  Also, the Black Bulls base of operations is under attack, but a mysterious young guy named Henry is helping defend the base.

Meanwhile, at the top of “the Golden Dawn Magic Knights” headquarters, the current Wizard King, Lord Julius Novachrono, is meeting William Vangeance, a member of the Golden Dawn.  It is an encounter that will change everything.

[This volume includes bonus material:  “The Blank Page Brigade;” an “Afterword;” and sketches.]

THE LOWDOWN:  The Black Clover manga continues to be one of the best shonen battle manga available to English-speaking audiences.  I have read six volumes so far this year, and I can't get enough of this exciting series.

Black Clover Graphic Novel Volume 16 moves away from the Royal Knights tournament story which has dominated much of the recent volumes.  Vol. 16 is a game-changer, and the revelations are too shocking for me to risk spoiling anything.  I can say that this blood-chilling volume contains ten chapters that are ready to rock your world.  This volume epitomizes why Black Clover is both a popular manga and an internationally beloved anime series.

I READS YOU RECOMMENDS:  Fans of the top Weekly Shonen Jump manga will definitely want to try the “Shonen Jump” series, Black Clover.


Posted by Leroy Douresseaux at 5:46 PM