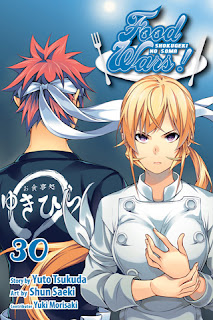 Food Wars!: Shokugeki no Soma is a shonen manga series written by Yuto Tsukuda and illustrated by Shun Saeki.  Yuki Morisaki also works as a contributor, providing the recipes for the series.  Food Wars! was serialized in the Japanese manga magazine, Weekly Shonen Jump, from November 2012 to June 2019.  VIZ Media published an English-language edition of the manga as a paperback graphic novel series from August 2014 to June 2020 under two imprints:  first, “Shonen Jump Advanced” and then, “Shonen Jump.”

Food Wars! focuses on teenager Soma Yukihira.  He grows up cooking in his father's Yukihira Family Restaurant.  The 15-year-old wants to be a better chef than his father, Joshiro Yukihira, so he hones his skills day in and day out.  His father decides to enroll him in a classy culinary school, Totsuki Saryo Culinary Institute, a place that prides itself on a 10 percent graduation rate.  If Soma Yukihira really does not want to attend Totsuki, how can he succeed?

As Food Wars!: Shokugeki No Soma, Vol. 30 (Chapters 254 to 262; entitled “The Way They Do Things”) opens, the fifth and final bout of “the Régiment de Cuisine Shokugeki” begins.  There were three cards in the previous four bouts of the Régiment, pitting three members of Soma and his allies' group, known as “the Resistance,” against Totsuki's “Council of Ten.”  If the Resistance wins the Régiment, they save their expelled classmates and gain seats on the council.  If they lose, all students connected to the Resistance are expelled and Soma's father, Joshiro, becomes a slave... of sorts.

In the final bout there are only two cards, but each side's two competitors must work together, one producing a dish that is an appetizer and the other a dish that is the main course.  Representing Council of Ten are the Council's top two chairs, Eishi Tsukasa (Chair #1) and Rindo Kobayahsi (#2).  Representing the Resistance are Erina Nakiri and Soma, and Erina's father, Azami Nakiri, is the lead judge.  And he wants his daughter to lose!

While Tsukasa and Kobayashi work together, Erina and Soma argue over which of them will create the main course, because both consider creating the appetizer an admission that he or she is the lesser chef of the two.  After Tsukasa and Kobayashi finish their dishes first and blow the judges and the audience away with the appetizer and main course, can Erina and Soma finish bickering long enough to do the impossible... and cause an episode of “the Gifting” that is beyond anyone's experience?

[The volume includes a recipes, miscellaneous illustrations, and bonus comics.]

THE LOWDOWN:  The Food Wars! manga finally reaches the end of the great shokugeki – a battle of chefs – that will decide the fates of many students.  And the dishes produced during this great competition made me want to eat each page of this epic story.

Food Wars!: Shokugeki No Soma Graphic Novel Volume 30 is a pivotal volume in the series.  Not only does it end “the Régiment de Cuisine,” but it makes us wait for the aftermath.  The entire focus of Vol. 30 is about the actual kitchen battle, with some of the story devoted to why the major players think the way they do about cooking.

Adrienne Beck's translation captures the character nuances, but also gives the competition depth and weight.  This story arc isn't just another fight; it shapes the direction of this narrative's final quarter.  So it is a must-read for fans of the series.


Posted by Leroy Douresseaux at 5:53 PM