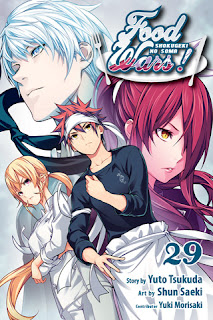 Food Wars!: Shokugeki no Soma is a shonen manga series written by Yuto Tsukuda and illustrated by Shun Saeki.  Yuki Morisaki also works as a contributor, providing the recipes for the series.  The manga was serialized in Japanese manga magazine, Weekly Shonen Jump, from November 2012 to June 2019.  VIZ Media published an English-language edition of the manga as a paperback graphic novel series from August 2014 to June 2020 under its “Shonen Jump Advanced” and “Shonen Jump” imprints.

Food Wars! focuses on teenager Soma Yukihira.  He grows up cooking in his father's Yukihira Family Restaurant.  The 15-year-old wants to be a better chef than his father, Joshiro Yukihira, so he hones his skills day in and day out.  His father decides to enroll him in a classy culinary school, Totsuki Saryo Culinary Institute, a place that prides itself on a 10 percent graduation rate.  If Soma Yukihira really does not want to attend Totsuki, how can he succeed?

As Food Wars!: Shokugeki No Soma, Vol. 29 (Chapters 245 to 253; entitled “Final Battle”) opens, the “fourth bout” of the Régiment de Cuisine Shokugeki begins.  There are three cards in each bout of the Régiment, pitting three members of Soma and his allies' group, known as “the Resistance,” against Totsuki's “Council of Ten.”  If the Resistance wins the Régiment, they save their expelled classmates and gain seats on the council.  If they lose, all students connected to the Resistance are expelled and Soma's father becomes a slave... of sorts.

First, the Council's Momo Akanegakubo battles the Resistance's Erina Nakiri with “brown sugar” as the ingredient.  Then, Satoshi Isshiki takes on the Council's Eishi Tsukasa and the ingredient is “rabbit meat.”  In the final card of the fourth bout, the Council's Rindo Kobayashi meets Takumi Aldini in a battle of “spear squid.”  All is going well until someone powerful decides to crash the judges table!

[The volume includes a recipes, illustrations, and a bonus story, "Our Golden Days On Moon's Shadow."]

THE LOWDOWN:  The Food Wars! manga is moving towards the end of the great shokugeki – a battle of chefs – that will decide the fates of many students.  That's just fine because this manga is usually at its best during the cooking battles.

Food Wars!: Shokugeki No Soma Graphic Novel Volume 29 is rolling along as it has been the past several volumes of this battle between the resisting students and the school's ruling council.  Then, writer Yuto Tsukada and artist Shun Saeki throw the readers for a loop with a suite of surprises in the last three chapters of this volume.

These surprises are the kinds of delights that hit shonen battle manga offer as tidbits and treats to keep readers coming back for more.  In Food Wars!, there is always another delicious dish.


Posted by Leroy Douresseaux at 5:10 PM