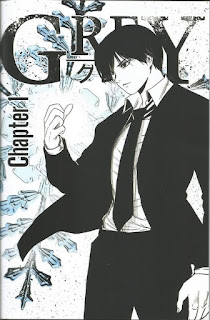 Grey is a new independently published comic book series from writer Kris Hornett and artist Kero Beroz.  Published by The Grey Room, the series saw its debut issue, Grey. Chapter 1., just recently published.  Grey is a hybrid, a combination of an American comic book format and Japanese manga aesthetics.  Grey is also similar to what was once called OEL manga or “original English language” manga, a genre associated with publisher, TOKYOPOP.

Grey is set in the realm of Ketiyama (apparently an archipelago).  The story takes place an indeterminate time after the occurrence of an event known as “the Sonoma Incident,” which was the outbreak of a lethal virus on Nacirema, one of Ketiyama's islands.  The outbreak left the island in chaos, destruction, and division.  As a sign of good faith and as a last attempt to restore order, the ruling Board of Officials allowed the people to elect a team of highly trained tactical agents, known as “the Bureau,” to serve and protect them.

Within the Bureau is an elite unit known as “Nimbus.”  This is a team of five agents who are sworn to maintain moral balance and to enforce the law.  The agents of Nimbus are also apparently able to manipulate their “prana” (“life energy”).  One of the agents is 20-year-old Shuyin Hagamuri.

As Grey. Chapter 1 (“Hello Winter”) opens, Shuyin is attending the International Fashion Fest (IFF).  After one of the models is attacked, Shuyin receives an unusual warning.  Shortly afterwards, Shuyin in investigating an invasion of Bureau headquarters when he learns that, yes, the shadows of his past have resurfaced.  And they are portending disaster.

THE LOWDOWN:  Grey is not one of those comic books that you read and toss in the already-read-pile before moving on to the next comic book.  Grey is a shockingly well-developed concept and exists in world with a complex history that seems (at least to me) to permeate every panel of the story.

Grey. Chapter 1 teases the readers and offers them a hint at what is to comic, but the story is not hard to follow, as the creators focus much of the action through Shuyin Hagamuri.  Shuyin seems to be one of those steadfast protagonists.  He also seems more of a fidelity-to-vocation professional and less like one of those relentless law dog types.  But, as it is very early in the overall narrative, I certainly am assuming a lot.

I like the art and graphical storytelling, which is composed of big panels, but is intimate instead of being widescreen and epic.  The illustrations are in black and white, but the story has a color vibe.  Or maybe what I am feeling is vibrancy of the story.  I like the matter-of-fact lettering, which is not polished, but is also not obtrusive.

I am curious about Grey, and I want to recommend that readers looking to support independent and DIY comics buy this first issue (which you can do at the publisher's website).  Some of this first chapter is unpolished, and this is obviously because the creators are still feeling their way around the narrative.  Regardless, Grey has the potential to offer a lot of surprises if the creators can keep it going... which involves money... which is where your support comes into play...

I READS YOU RECOMMENDS:  Fans of manga-inspired comic books will want to try Grey. Chapter 1.

Posted by Leroy Douresseaux at 5:16 PM