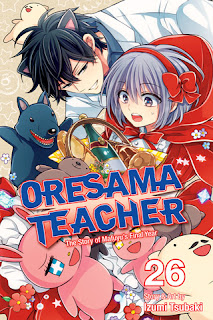 Oresama Teacher is a Japanese manga written and illustrated by Izumi Tsubaki.  It was serialized in the shojo manga magazine, Hana to Yume, from July 2007 to February 2020.  VIZ Media has been publishing an English-language edition of the manga as a paperback graphic novel series under its “Shojo Beat” imprint since March 2011.

Oresama Teacher focuses on Mafuyu Kurosaki.  She was once the take-charge, hard-hitting leader (“bancho”) of a high school gang.  Hoping to reform her daughter of her delinquent ways, Mafuyu's mother sends Mafuyu to Midorigaoka Academy, an isolated school far off in the country.  There, Mafuyu reunites with Takaomi Saeki, the childhood friend who set her on the path of delinquency.  Now, Saeki is Mafuyu’s homeroom teacher.

As Oresama Teacher, Vol. 26 (Chapters 147 to 152) opens, Mafuyu has been kidnapped.  The kidnapper is her homeroom teacher, Mr. Seiichiro Maki, who is something of a conundrum.  He has spirited her off to some unknown place and locked her in a room.  When she discovers that she is locked in one of many rooms in a mansion, Mafuyu is happy because she loves mansions.  That aside, she will have to unravel the mystery of Mr. Maki if he is to escape and continue her bid to save her school.  But to do what she needs to do, she will have to rely on an enemy.

THE LOWDOWN:  The Oresama Teacher manga is a bit inconsistent in tone.  It is, at its heart, a raucous high school manga featuring former delinquents and scheming high school club types.

Oresama Teacher Graphic Novel Volume 26 shows the series' other side, its best side, and that is poignant, character revealing back stories.  I find that creator Izumi Tsubaki does her best work in these flashbacks and characters pieces.  She grounds the silliness of her narrative in good storytelling with the dramatic examinations of her characters.

JN Productions also does its best work in translation and English adaptation when the story turns poignant.  Here, letterer Erik Erbes also turns his fonts into strains of haunting melodies that draw the readers into the drama before they return to the rough and tumble.  Vol. 26 is an entry in the series that longtime readers deserve.


Posted by Leroy Douresseaux at 5:24 PM