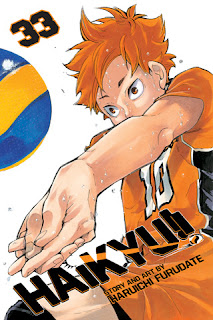 Haikyu!! is a Japanese sports manga series written and illustrated by Haruichi Furudate.  This manga was serialized in the manga magazine, Weekly Shōnen Jump, from February 2012 to July 2020.  VIZ Media has been publishing an English-language edition of Haikyu!! as a paperback graphic novel series under its “Shonen Jump” imprint since July 2015.

Haikyu!! focuses on Shoyo Hinata.  As a child, Hinata saw the legendary volleyball (haikyu) player known as “the Little Giant” compete at the national volleyball finals.  From that point, Hinata began a quest to be the best volleyball player ever.  In a sport in which tall athletes dominate, however, Hinata's height of 5'4” is considered too short.  Now, he plays for Karasuno Public High School with his rival, Tobio Kageyama.  Hinata does not believe that a player needs to be tall in order to play volleyball, especially when a player can jump higher than anyone else – as he can.

As Haikyu!!, Vol. 33 (Chapters 288 to 296; entitled “Monsters' Ball”) opens, the “National Spring Tournament” continues.  Karasuno (representing Miyagi Prefecture) won its opening match and, in the second round, matches up against Inarizaki High School, one of the favorites to win the entire tournament.  Plus, Inarizaki has a set of “wonder twins,” the brothers, Osamu and Atsumu Miya, who even have their own version of Hinata and Kageyama's “freak quick.”

If underdog Karasuno gets past Inarizaki, awaiting them is Nekoma Municipal High School (Tokyo Venue Sponsor representatives).  Karasuno and Nekoma have faced each other in practice matches in the past, but Karasuno has never won any of them!

THE LOWDOWN:  I had not read the Haikyu!! manga in almost a year and a half.  Now, I have read three volumes in five months.

Haikyu!! Graphic Novel Volume 33 brings to a close the Karasuno vs. Inarizaki High story arc, which began in Vol. 29 and ran through three entire volumes (Vols. 30 to 32), before ending four chapters into Vol. 33.  It is easy to forget how really good this series is at depicting all that is fast and furious about a volleyball match... until you read it again.  In fact, Haikyu!! creator Haruichi Furudate is so good at depicting the excitement of volleyball that I am not bored even when following a match that runs through several volumes.

As usual, Adrienne Beck's translation captures the game action and, when necessary, the evolution of the characters.  Letterer Erika Terriquez shines as she continues to create the furious comic book noise of the game.  This duo keeps us going as this series approaches its end.

I READS YOU RECOMMENDS:  Fans of sports manga will want the “Shonen Jump” title, Haikyu!!


Posted by Leroy Douresseaux at 5:11 PM