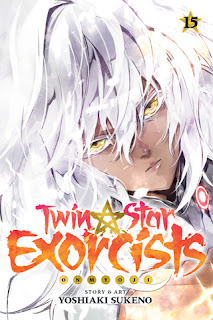 Sōsei no Onmyōji is a shonen manga series written and illustrated by Yoshiaki Sukeno.  The manga has been serialized in the Japanese manga magazine, Jump Square (Shueisha, Inc.), since October 2013. VIZ Media is publishing an English-language edition of the manga as a series of graphic novels, entitled Twin Star Exorcists.  VIZ released the series first under its “Shonen Jump Advanced” imprint, and then, under its “Shonen Jump” imprint since July 2015.

Twin Star Exorcists focuses on Rokuro Enmado.  He did not want to be an exorcist, but he met a mysterious girl named Benio Adashino.  This 14-year-old was serious about being an exorcist, and she wanted to fight the monstrous creatures called Kegare.  Because their destinies are intertwined, Rokuro and Benio are called the “Twin Star Exorcists.”  They are fated to marry... and to conceive the “Prophesied Child.”

As Twin Star Exorcists, Vol. 15 (Chapters 53 to 56) opens, Benio is in Magano, the realm of the Kegare.  She must begin the ritual to claim her spiritual powers... and her true form – that of a Kegare.  When she is attacked, however, who in Magano will help her?

Meanwhile, on Tsuchimikado Island, Rokuro and his recently formed “Enmado Family,” prepare for their first mission into Magano.  This is the “Yuto Punitive Expedition.”  Rokuro hopes to get revenge for the killing of his friends long ago, but he and his family are really just support for the expedition.  Well, that is until everything goes... unexpected.

THE LOWDOWN:  The Twin Star Exorcists manga is usually in a constant state of flux, as creator Yoshiaki Sukeno introduces new characters and new subplots at a steady rate.  Sometimes, however, the narrative goes still and focuses intensely on violence and combat.

Twin Star Exorcists Graphic Novel Volume 15 focuses on the stars, Rokuro and Benio.  Each is entering one of the most intense states of their struggle, and Vol. 15 is the payoff for longtime readers.  I can only say that this is a not-to-be-missed volume, as it introduces some great things to come.

Once again, Tetsuichiro Miyaki (translation) and Bryant Turnage (English adaptation) deliver a strong English adaptation with another ending that will force readers to come back for more.  And Stephen Dutro's lettering is perfect for this volume of utter surprises and loud shocks.

I READS YOU RECOMMENDS:  Fans of action-fantasy, shonen manga will want to try the “Shonen Jump” manga, Twin Star Exorcists.

Posted by Leroy Douresseaux at 5:10 PM