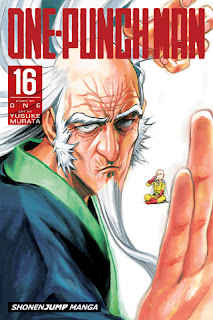 One-Punch Man is a Japanese superhero franchise that began as a webcomic created by the writer-artist ONE.  Later, ONE joined artist Yusuke Murata to create a digital manga remake of One-Punch Man, and it began publication on Shueisha's Tonari no Young Jump website in 2012.  VIZ Media has been publishing an English-language edition of the digital manga as a paperback graphic novel series under its “Shonen Jump” imprint, beginning in 2015.

One-Punch Man focuses on Saitama, who wants to be a hero.  Beginning his superhero training when he is 22-years-old, he becomes one when he is 25.  He really does not look like a superhero, with his lifeless facial expression, bald head, and unimpressive physique.  But he beats the snot out of super-villains with one punch, and he even has his own disciple, the young cyborg, Genos (who really needs no training).

As One-Punch Man, Vol. 16 (Chapters 81 to 84; entitled “Depleted”) opens, Gara, the so-called “Hero Hunter,” has a man-to-boy talk with Waganma, the child kidnapped by the Monster Association.  It seems that the boy has the latest edition of the “Hero Guide,” the publication that offers information on members of the Hero Association, including their rankings within the association and a detailed explanation of their powers and how they work.  Gara needs that because outside of that hideout is a group of eight heroes looking to take him down.

But Gara thinks that even by himself he can defeat this group of mostly “Class B” and low-rank “Class A” heroes.  What will happen, however, when Genos comes racing in...?  Or what happens when a powerful duo that is familiar with Gara visits?  Plus, Saitama fights his toughest battle to date – trying to beat King at video games.

One-Punch Man Graphic Novel Volume 16 is pure battle manga.  Vols. 14 and 15 were sheer joys to read, but Vol. 16 just wants to pound your face with page after page of fight comics.  The narrative does not move forward with this volume, but we can enjoy Yusuke Murata's amazing battle manga art.

I READS YOU RECOMMENDS:  Fans of shonen battle manga and of superhero comic books will love the “Shonen Jump” title, One-Punch Man.


Posted by Leroy Douresseaux at 7:00 PM