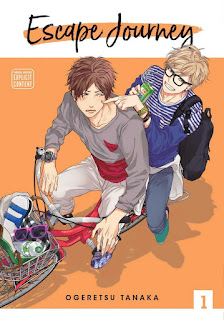 Escape Journey is a yaoi manga from manga creator, Ogeretsu Tanaka.  Yaoi manga is a subset of boys' love (or BL) manga, which depicts amorous situations between male romantic leads.  Yaoi manga usually features explicit depictions of sex between those male leads.  Escape Journey focuses on two former high school lovers forced back together when they attend the same university.

Escape Journey, Vol. 1 (Chapters 1 to 5 plus “Last Escape”) introduces Naoto Hisami and Taichi Hase.  In high school, they were lovers.  Naoto thought they were dating, but during a heated argument, Taichi tells Naoto, “You're nothing but a fuck buddy I blow off steam with sometimes.”  That leads Naoto to dump Taichi's ass.

One year later, Naoto is a student at a liberal arts college, and he is still angry about what Taichi said to him.  So Naoto is shocked to discover that Taichi, a science track student, is also a student at this liberal arts college.  The two soon find themselves forced together, again, with Taichi being an aggressive seme (top) to Naoto's submissive uke (bottom).  Taichi pounds Naoto's ass until it is raw, and all Naoto can do is howl and pant in pain and pleasure.

Taichi, however, is not verbal about his true feelings concerning Naoto.  Does he want them to be a “couple,” again?  Naoto begins to wonder about their future when he discovers that a young woman and fellow student, Fumi Matsuyama, has a crush on Taichi.  Will this discovery finally end the slowly mending relationship between Naoto and Taichi?

Yaoi manga is not pornography.  Explicit depictions of sexual intercourse may be inevitable in this genre, but yaoi mangaka deliver boys' love stories that are about drama, character, and romance.  In the best of the genre, the creators also take their characters' careers, professions, jobs, and/or social status seriously.

Still, Escape Journey Graphic Novel Volume 1 features some of the most explicit depictions of sexual intercourse between two men that I have ever seen in manga.  The artist includes full depictions of Taichi's penis penetrating Naoto's anus, but there is often a white stripe right at the point of penetration.  Sometimes, a series of three white stripes will cover portions of an erect penis in a pattern-like fashion.  Also, sometimes, the erect cock and balls are entirely in white silhouette.

The “bonus story” contains this volume's most explicit depictions of sex... by far.  That is saying a lot, because the main chapters have plenty of intense sex, including a scene that would probably qualify as rape in the real world.  The last three pages of the bonus story are... a riot.

That aside, there is a sweet and edgy side to the romance in Escape Journey.  It is the story of boys who don't quite understand the emotional side of their relationship, although the sexual side is quite prodigious.  This first volume is about the journey Naoto and Taichi take to understanding the inevitable relationship that they will share.  I have to say that this is a rich rewarding read, both as a romance and as a sex romp.


The text is copyright © 2019 Leroy Douresseaux. All Rights Reserved. Contact this blog or site for reprint and syndication rights and fees.


Posted by Leroy Douresseaux at 5:03 PM