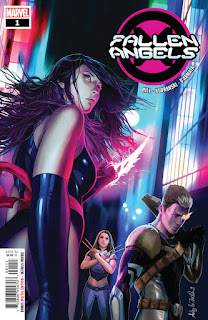 The X-Men are a Marvel Comics superhero team and franchise created by writer-editor Stan Lee and writer-artist Jack Kirby.  The X-Men #1 (cover dated: September 1963) introduced readers to a professor and his students who had unique powers and abilities because they were “mutants.”

This past summer (2019), writer Jonathan Hickman revamped, rebooted, and re-imagined the X-Men comic book franchise via a pair of six-issue comic book miniseries, House of X and Powers of X (pronounced “Powers of Ten”).  October 2019 welcomed “Dawn of X,” the launch of six new X-Men titles.  The new series are Excalibur, Marauders, New Mutants, X-Force, X-Men, and the subject of this review, Fallen Angels.

Fallen Angels 2020 is written by Bryan Hill; drawn by Szymon Kudranski; colored by Frank D'Armata, and lettered by Joe Sabino.  Fallen Angels focuses on the outsiders of Krakoa, mutants who don't belong in paradise because of their anti-heroic pasts.

Fallen Angels #1 (“Bushido”) opens as Kwannon does something bad.  Meanwhile, on Krakoa, the living island and mutant nation-state, Psylocke is in a state of meditation, in this new world of “Mutantkind,” unsure of her place in it.  But she gets a warning, a demand that she face a new threat, a god named “Apoth,” and it seems as if Psylocke's past is starting to come back to her.  Seeking the aid of Mr. Sinister and gathering the mutant warriors, Cable and X-23, to her side, Psylocke begins her personal mission of revenge.

I have come across commentary on the inter-webs that Fallen Angels is the best of the first wave of “Dawn of X” titles.  I am sorely disappointed to say that I have practically nothing to say about it.  The first issue barely registers with me, which is surprising.  I am a fan of Bryan Hill's writing, and his potent, forceful storytelling always moves something in me.  I'll check in on Fallen Angels later, but I still think that fans of this new X-Men direction should check out at least the first issue of all six titles.  In the meantime, I don't have a grade for Fallen Angels #1.


The text is copyright © 2020 Leroy Douresseaux. All Rights Reserved. Contact this blog or site for reprint and  syndication rights and fees.


Posted by Leroy Douresseaux at 5:08 PM