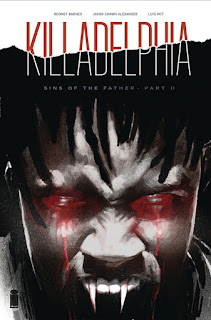 “Sins of the Father” Part II: “Death, My Sweet Savior”

James “Jim” Sangster, Jr. is a Baltimore Police Department beat cop who comes home to deal with the final affairs of his recently murdered father, revered Philadelphia homicide detective, James Sangster, Sr.  Jimmy hated his father, but now they're working together to stop an apocalypse – son and vampire dad!

Killadelphia #2 (“Death, My Sweet Savior”) finds the Sangster boys and Jose Padilla, the chief medical examiner, plotting to stop the machinations of John Adams... the second President of the United States.  It is a good thing that Jose had been working with Jimmy Sr. before... his untimely demise, because she already had a notion that there were vampires about... even if part of her was in denial.  Now, she and the Sangsters have some dirty, bloody work to do.

Meanwhile, in the Philly “Badlands,” Mr. President continues to shape his revolution.  But one of his soldiers, Tevin Thompkins, once the object of Jimmy Sr.'s search, has his focus on a more personal war.

I had planned on putting more time between my reading the first two issues of Killadelphia.  I liked Killadelphia #1 so much, and I thought if it waited a month or so before reading the second issue, I might be better able to tell if a glorious first issue was just beginners' luck on the part of Misters Barnes and Alexander.  However, once I obtained a digital review copy of Killadelphia #2, it kept calling to me, like Blanche kept calling on Mede in the film, Mandingo (1975).  [In this case, Killadelphia is the Mandingo and I am the desperate bed-wench.]

Seriously, there is no beginner's luck here.  Killadelphia #2 is a glorious read, and it may be even more kick-ass than the first issue, which was damn glorious itself.

Rodney Barnes' writing is the kind of rich, imaginative writing and detailed plotting that readers normally get from the best dark fantasy and horror prose.  Jason Shawn Alexander's graphical storytelling and art is powerful and alluring.  I think that reading it is like staring into the hypnotic gaze of a beautiful vampire (for instance, if Charlize Theron was vampire).

Luis Nct's coloring of Alexander's art is also beautiful, and it conveys the dangerous elements of this story with uncompromising boldness.  Letterer Marshall Dillon doesn't want to be left behind, so he turns his fonts into a thousand cuts – the way lettering should be in a vampire comic book.

If Killadelphia #3 is this good, then, I'll suspect that there is also something supernatural about this creative team...


Posted by Leroy Douresseaux at 5:36 PM