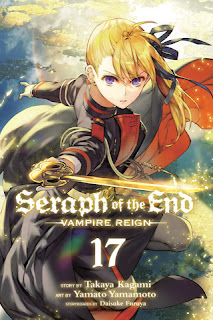 Seraph of the End is a Japanese dark fantasy manga written by Takaya Kagami and illustrated by Yamato Yamamoto, with storyboards produced by Daisuke Furuya.  It has been published in the manga magazine, Jump SQ, since September 2012.  VIZ Media has been publishing an English-language adaptation of the manga as a paperback graphic novel series, entitled Seraph of the End: Vampire Reign, since June 2014.

Seraph of the End: Vampire Reign is set in a world in which the trumpets of the apocalypse proclaimed the fall of humanity in the year 2012.  Vampires rose from the shadows and began their reign over the Earth.  A mysterious virus killed almost all adult humans, sparing those younger than 13 years of age.  The children were subsequently enslaved as livestock for vampires.  In 2016, the orphan, Yuichiro “Yu” Hyakuya, stepped forward, seeking revenge; his goal was and is to kill each and every vampire.

As Seraph of the End: Vampire Reign, Vol. 17 (Chapters 64 to 69) opens, Lt. Guren Ichinose has captured the angel that was summoned with the original apocalypse.  Now, Yuichiro and the angel have a lot of crap to say to one another, although Yu wants to save the angel.  Plus, Asuramaru, the demon spirit of  Yu's possessed weapon, is struggling with memories.  He tell Yuichiro that he doesn't want the memories, but when we see them, we'll want to know more – much more.

[This volume includes an “Afterword,” miscellaneous text, and a full-color mini-poster insert.]

THE LOWDOWN:  The Seraph of the End: Vampire Reign manga is one of my favorite vampire comics.  With its tales of military politics and demonic possession, it also offers unique character drama built on secrets and lost memories.

Seraph of the End: Vampire Reign Graphic Novel Volume 17 does all those things.  I don't think that Vol. 17 starts off as a promising volume, but then again, I did not expect the kind of secrets that would be revealed.  I want to be a spoiler, but that would be wrong because this is so good.  I think Vol. 17 is certainly one of those payoff volumes for longtime readers.

I READS YOU RECOMMENDS:  Fans of vampire manga will want to try of the “Shonen Jump Advanced” series, Seraph of the End: Vampire Reign.


Posted by Leroy Douresseaux at 5:26 PM