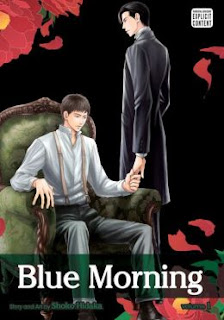 Also credited as “Shouko Hidaka,” mangaka Shoko Hidaka is known for her boys’ love manga, such as Restart, which is set in the world of male models. Her new work is Blue Morning, a yaoi manga graphic novel series. Yaoi manga is a subset of boys’ love manga (BL) and features explicit depictions of sex between male characters.

Blue Morning, Vol. 1 introduces Akihito Kuze, the 10-year-old heir to the viscount-ship of his late father, Akinao Kuze. After the death of his father, Akihito moves into his father’s mansion, where he meets the Kuze family’s very capable butler, Tomoyuki Katsuragi. Katsuragi is tasked with raising Akihito.

Seven years later, the 17-year-old Akihito is relentlessly drawn to Katsuragi, but is frustrated by the distance between them. The handsome and intelligent Katsuragi is well-respected and popular, even among the aristocracy, so he is highly sought after for his advice. Driven to learn more about his butler, Akihito investigates Katsuragi’s past, both with the Kuze family and in Katsuragi’s own family.

First, there isn’t much in the way of “explicit sex” in Blue Morning Volume 1, except for a night in which the rough play between manservant and charge is emphasized. Blue Morning is a period piece and romantic drama in which romance must compete with intrigue concerning high society and class structure.

Schools for the elite, parties for the nobility, and assorted gatherings of the rich, powerful, and influential are a staple of the first volume of Blue Morning. I think that what makes this story interesting is how much Akihito Kuze hates it all, yet this life is his destiny. Not only is he supposed to be the viscount, but he is also expected to increase the family’s rank. The narrative can be a bit dry at times, and it seems like a boys’ love version of Downton Abbey, except without the popular British drama’s self-assuredness in its storytelling and characters. I’m interested to see where this series goes… especially if the romance gets even rougher.

Posted by Leroy Douresseaux at 6:03 AM