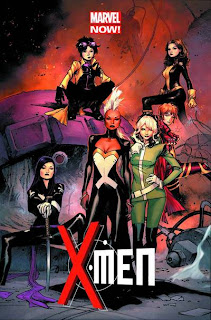 Marvel Comics’ Marvel NOW initiative (which began in Fall 2012) is the major re-launch of the publisher’s comics line. Within that major re-launch have been several re-launches, and one of the big unveilings is a new comic book entitled, X-Men.

The new X-Men is written by Brian Wood and drawn by Olivier Coipel. That is a major creative team, but the really big news about this new X-Men title is that it features a female-only lineup. This new X-Men comic book stars Storm, Kitty Pryde, Psylocke, Rachel, Rogue, and Jubilee.

X-Men #1 (2013) begins with Jubilation Lee (Jubilee, of course) on the run, and in possession of an infant. Someone is following her, and she calls for the X-cavalry. Meanwhile, John Sublime shows up at The Jean Grey School for Higher Learning in Westchester, New York. He has a tale of impending doom to tell.

Writing the X-Men means recycling the ideas of other writers, ideas that were first published decades ago. What Stan Lee, Roy Thomas, Len Wein, and Chris Claremont wrote can be and has been rehashed, re-imagined, remade, and re-jiggered into countless new comic book stories. This has gone on for decades and can go on for many, many more decades.

Along comes Brian Wood. He is one of those writers that can take someone else’s concept and write new stories that are as fresh and as innovative as the original idea. See him do it on Dark Horse’s new eponymous Star Wars comic book with artist Carlos D’Anda. Wood’s new X-Men is the freshest take on the franchise since Grant Morrison shocked us with New X-Men 13 years ago.

One of the elements that made Morrison’s New X-Men so bracing was the art by Frank Quitely. Wood has an artist collaborator who is still ascending. Olivier Coipel, the French comic book artist, has not yet reached his creative peak, but he is a good storyteller. His pretty, eye-candy style is made even prettier by Laura Martin’s dazzling colors.

Coipel is making X-Men a stimulating, refreshing read. Also, amazing is that he is the first “artist of color” (or how about “Black guy”) to be the series artist (and not a guest artist) on a main or “flagship” X-Men title in the 50-year history of the franchise. When you consider that people associated with Marvel have evoked Dr. Martin Luther King and Malcolm X to describe the X-Men, it is ridiculous that it took this long.

By the way, no African-American or Black writer has been the series writer for Uncanny X-Men or X-Men. Is this an accident or is it because the powers-that-be over the years just wanted it that way? Well, I guess Brian Wood and Olivier Coipel are as bold as it’s ever going to get.

Any way, I like X-Men #1. This is just the first issue, but I already think that the 2013-launched X-Men is a fabulous comic book.

Posted by Leroy Douresseaux at 2:08 PM