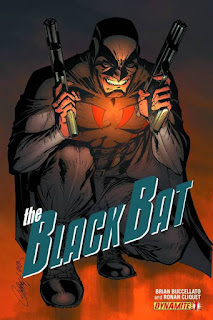 Dynamite Entertainment has brought The Black Bat back from the public domain comic book graveyard in a new comic book series. The character that appeared in Black Bat Detective Mysteries, a short-lived, 1930s pulp magazine, published for six issues. The first Black Bat is thought to have had an influence on the creation of The Batman.

The Black Bat #1 opens with the Black Bat kicking ass. He’s looking for Silk, a police snitch who will become his assistant. The story also goes into flashback mode in order to take a look at the man who would become the Black Bat, Tony Quinn. He was a brash defense attorney for the mob who compromised his ethics for financial gain. It cost him a lot, but now as the Black Bat he can seek redemption… or vengeance?

Images and graphics in The Black Bat resemble image and graphics in and perhaps the spirit of Batman comic books. However, what writer Brian Buccellato offers is closer to “street level” comic books that Marvel Comics has produced over the years, featuring characters like Daredevil, Moon Knight, and The Punisher. It’s vigilante vs. organized crime, and the superhero costume seems extraneous in the moody, urban fiction edge of Buccellato’s script.

Artist Ronan Cliquet has a graphic style and visual sense that is perfect for the comics yarn Buccellato spins. Cliquet’s compositions and designs are flashy in a Batman mode, but a bit earthier. Once again, crime fiction edges out costumes. Dynamite Entertainment’s The Black Bat does have potential.

Posted by Leroy Douresseaux at 7:35 AM