Book Review: IF YOU WERE HERE: A Novel of Suspense 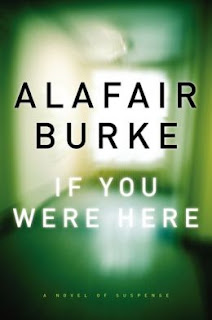 IF YOU WERE HERE
HARPERCOLLINS – @HarperCollins

Alafair Burke is formerly a prosecutor and currently an educator in criminal law. She is also the best-selling author of several novels, including the “Ellie Hatcher” series. Burke’s most recent book is the 2013 crime and mystery novel, If You Were Here. The novel focuses on a magazine journalist who is chasing down leads on a hot story only to discover that it involves someone from her past.

McKenna Jordan spent four years in the New York City District Attorney’s Office. Then, the controversial case of police shooting of a Black teenager led to her disgrace and departure. A decade later, McKenna Jordan is a journalist at NYC Magazine.

McKenna’s current assignment has her chasing the latest urban folktale. This is the story of an unidentified woman who heroically pulled Nicky Cervantes, a teenage boy, from the subway tracks seconds before the arrival of an oncoming train. McKenna gets lucky and locates a cell phone video that purportedly captures the incident. Our roving reporter thinks that she has an edge on competing journalists that are also scrambling to identify the mystery heroine.

When she sees the video, McKenna has her past come rushing headlong into her present. The woman on the video bears a striking resemblance to Susan Carol Hauptmann, a West Point classmate of McKenna’s husband, Patrick Jordan. But Susan disappeared 10 years ago, and is believed by some to be dead. Now, McKenna has to revisit everything that happened a decade ago, including the case the cost her a promising career. This former prosecuting attorney’s search for the truth is a journey of twists and turns across New York City. She will find that some friends are foes, and she will find in an enemy someone that has her back. But can McKenna deal with this cruel reality – some of the darkest secrets are actually buried close to her?

I can use sports metaphors and terms to describe If You Were Here. Like an exceptional football running back, once the mysteries and conspiracies that drive the narrative get moving, If You Were Here becomes a great “downhill runner.” There is no stopping this novel until it reaches the end zone.

Seriously, If You Were Here is a good read. I think this novel works because author Alafiar Burke forces the reader to become one with McKenna Jordan. McKenna is the reader’s friend, not just because she is the heroine, but also because the other characters are not one-hundred percent trustworthy (at least compared to McKenna).

McKenna is the protagonist, of course, but to some degree, all the other characters are antagonists. Not every character is an adversary, nemesis, villain, or killer, of course. Real or imagined, directly or indirectly, deliberately or inadvertently, purposefully or accidentally, everyone else is doing something that is an obstacle to McKenna’s goals. Some mean well, but they certainly live up to the saying about the road to hell being paved with good intentions.

That is how Burke creates a novel of twist and turns, surprises and shocks, and just plain bombshells. There are times in the story when McKenna takes things for granted or makes assumptions, and it leads to an embarrassment or worse, mortal danger for her and her allies and loved ones.

I do find If You Were Here to be a bit longer than necessary. There is a noticeable amount of this novel that seems like padding. In the realm of pop novels known as pot-boilers, however, Alafair Burke writes prose that brings heat to readers’ imaginations and keeps them hopping from one page to the next.

Posted by Leroy Douresseaux at 6:33 AM