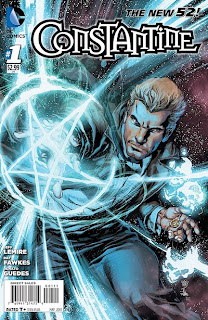 The Spark and the Flame Part 1: “The Price We Pay”

After first appearing, in full, as a supporting character in The Saga of the Swamp Thing #37 (June 1985), John Constantine starred in his own comic book, Hellblazer. Twenty-six odd years later, that series came to an end with Hellblazer #300 (April 2013 cover date).

With Constantine #1 (May 2013 cover date), John Constantine is headed in a new direction. Once tempted by magic to the point of his near-destruction, Constantine seeks to “maintain balance and prevent anyone from becoming too powerful.” That is a direct quote taken from Constantine #1. The maintainer of balance: that’s John Constantine’s place in The New 52.

Constantine #1 opens in New York City where Constantine lives in a pet story, Dotty’s Pets. He already has a new mission – get Croydon’s Compass before his rivals, a group called “Cold Flame,” obtain it. You’d be surprised at the membership of Cold Flame, but I’ll say that Zatara is/was one of them. Dragging along a reluctant acquaintance, Chris, Constantine heads to Norway for a battle in which someone does pay a rather high price.

Same old John: knowing him always costs someone his or her life. What can I say about the new Constantine comic book? Well, the first issue lacks the occult detective, London-noir, street hustler, Richard Stark-vibe of Hellblazer. Constantine the comic book is colorful and slick, like the 2005 film, Constantine, but without Keanu Reeves’ sincere-thespian stiffness. Magic explodes as if it were a mutant power, with crackling bursts of energy. It’s a bit like Harry Potter without the wands.

Constantine is interesting. If you’re looking for the old thing – the way Hellblazer was – that’s gone. I like this new thing. I’m not in love with it, but I like it.

Posted by Leroy Douresseaux at 5:07 AM