Review: A GAME OF THRONES: The Graphic Novel Volume 2 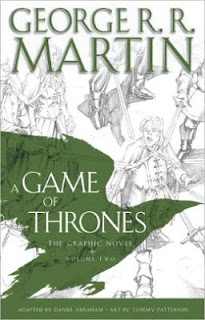 A Game of Thrones is the 1996 novel from science fiction and fantasy author, George R.R. Martin. The novel is the first book in Martin’s best-selling A Song of Ice and Fire series of high fantasy novels, which are the basis for the HBO television series, “Game of Thrones.”

Dynamite Entertainment is producing a comic book adaptation of A Game of Thrones. The comic book adaptation of the novel is expected to run over 24 issues of about 29 pages per issue. The writer responsible for adapting George R.R. Martin’s prose into comics form is science fiction and fantasy novelist, Daniel Abraham (who sometimes collaborates with Martin on fiction). The artist is Tommy Patterson, who has drawn comic books for Boom! Studios and Zenescope Entertainment. Mike S. Miller has provided the cover art for most issues of A Game of Thrones the comic book.

In A Game of Thrones: The Graphic Novel: Volume 2, the action takes place in the icy north of The Wall, the valley of the Eyrie, the decadent south and the capital city of King’s Landing, and the Dothraki’s sacred Vaes Dothrak. Much is happening. Lord Eddard Stark, the King’s Hand, continues to investigate the death of Jon Arryn, the previous Hand. Stark’s wife, Lady Catelyn Stark, accuses the dwarf Tyrion Lannister of trying to kill her son, Brandon (“Bran”), and of another possible murder.

In the barbarian lands, the young princess, Daenerys Targaryen, has found the unexpected in her marriage to Dothraki warlord, Khal Drogo. Meanwhile, her petulant brother, Prince Viserys (who calls himself “The Dragon”), continues to demand that the Dothraki help him reclaim his inheritance as Lord of the Seven Kingdoms from King Robert Baratheon. Meanwhile, the Lannisters continue to plot against everyone.

When I first read A Game of Thrones: The Graphic Novel: Volume 1, I was not familiar with anything related to A Game of Thrones, except that I’d heard of the television series. I did not know that the novel was being adapted into comic book form until Random House sent me a review copy of the first graphic novel in early 2012.

I did not expect much from that first experience, but I ended up thoroughly enjoying it. Thus, I have been anticipating Random House sending me the second collection of A Game of Thrones: The Graphic Novel for several weeks now, and they have sent it.

Based only on my readings of the comic book, I see A Game of Thrones as a great big character drama and an epic soap opera, told as historical fiction. The comic book, as written by Daniel Abraham, captures the epic scope of A Game of Thrones – the large cast and the expansive setting and background – by giving the reader an intimate view of all the major players. Abraham also focuses closely on bit players in the moments they make a direct impact on the narrative. Abraham engages the readers by narrowing the focus on character conflicts, motivations, and relationships.

In Vol. 1, I thought Tommy Patterson was a good artist, but I found his storytelling to be inconsistent. Now, the awkwardness I noticed in some scenes is gone. Patterson’s style is consistent and his compositions results in clear storytelling. Patterson captures everything that is big, grand, and expansive about A Game of Thrones, but his pencil has a laser focus on detailing the characters, both their physicality and personality. Graphically, visually, and pictorially, Patterson brings the characters to life with the skill of someone doing this much longer than he has.

The result of Abraham and Patterson’s efforts is one especially good comic book. Yes, you can call it a “good read,” but add “x 2” to that. As for the back matter: this book offers five pages from A Game of Thrones the novel. Then, the editors show how those pages of prose become a script, thumbnails, pencil art, lettered art, colored art, and finally 5 pages of A Game of Thrones #9.

Posted by Leroy Douresseaux at 6:12 AM