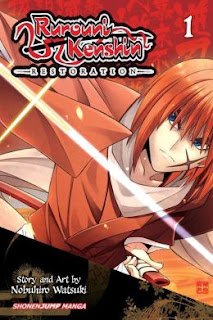 Rurouni Kenshin: Restoration is a series reboot and a re-imagination of Rurouni Kenshin, a shonen manga from creator Nobuhiro Watsuki, who also produces the new series. The first series is set in the Meiji period in Japan. It follows a former assassin named Himura Kenshin, a “rurouni” or wandering swordsman.

Before he wandered, Kenshin was “Hitokiri Battōsai,” a ruthless assassin. He killed men “as if he was carnage incarnate,” during the Bakumatsu era, a 15-year period between the arrival of the Black Ships in Japan and the Meiji Restoration. After the Bakumatsu war, Kenshin seeks atone for the murders he committed by offering protection and aid.

Rurouni Kenshin: Restoration, Vol. 1 contains Acts 1 to 3 of the reboot and also a short story or side story entitled, “The Prologue: Act Zero,” a story that apparently takes place about five days before Act 1.

Rurouni Kenshin: Restoration Volume 1 opens in the 11th year of the Meiji era. Kenshin has wandered the countryside of Japan offering protection and aid to those in need as atonement for the murders he once committed. Now, he arrives in Tokyo and finds himself entered in the “Sword-Fighting Program,” sponsored by Takeda Kanryo. Kanryo is “the Great Merchant,” a Westernized Japanese man who loves to watch former samurai and ronin battle by sword.

Kenshin also meets Kamiya Kaoru, a beautiful young swordswoman, trying to save her late father’s dojo, where she teaches her father’s school of swordsmanship, Kamiya Kasshinryu. She needs to win 10 consecutive fights in order to stop Kanryo from foreclosing on the dojo. What she does not know is that the Great Merchant has even darker plans for her dojo. Does Kenshin’s atonement include helping Kamiya?

I had heard of both the Rurouni Kenshin manga and its anime adaptation, but never read the manga or watched the anime. Between the manga that VIZ Media sent me and a few issues of Shonen Jump I was familiar with Nobuhiro Watsuki’s other series, Buso Renkin and Gun Blaze West. Both series are odd and the stories feature sudden and surprising depictions of violence, but they are teen-oriented manga.

Rurouni Kenshin: Restoration is also teen-oriented. In fact, Watsuki describes it as a “children’s manga,” in the “Free Talk Section” of this first volume. [He uses these six pages of text to explain why he is rebooting Rurouni Kenshin.] I would describe Rurouni Kenshin: Restoration as a manga for teen and even preteens. There is sword-fighting and fights, but no death. The emphasis is that Kenshin was once a savage killer of men, but now he is atoning for that; even his sword, Sakabato, is a non-lethal sword. Rather than be about violence and death, it is really violence that is as much about comedy as it is about aggression.

Kenshin is an attractive character, and his adversaries are an equally engaging lot of colorful misfits. If anything, that would bring me back, at least occasionally, to the series. The plots are not particularly interesting, and they really serve as reasons for characters to engage one another, as friends or enemies or somewhere in between. Honestly, on my own, I likely would not be a regular reader of Rurouni Kenshin: Restoration. It is shonen battle manga that is a bit too comic for me. I tend to go for the darker stuff like my beloved Bleach.

Posted by Leroy Douresseaux at 6:35 AM