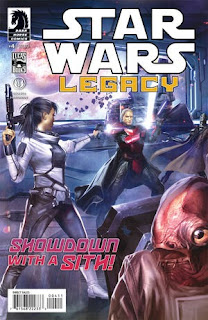 Young Miss Solo finds a battered Imperial communications droid and a lost lightsaber. Soon, Ania is on the run with her friend Sauk, an ice harvester and refugee from Mon Calamari. Later, AG-37, an ancient assassin droid, joins them. Meanwhile, young Imperial Knight, Jao Assam, searches for the master to whom he is apprenticed, Imperial Knight Yalta Val. The quartet becomes involved in a Sith conspiracy involving the building of a communications array in the Carreras System.

As Star Wars: Legacy Volume 2 #4 opens, Governor Biala of Shifala begins to realize that she cannot trust Imperial Knight Yalta Val, who has taken control of the construction of the Shifalan communications array. Little does she realize that this Val is an imposter and is actually a Sith warrior.

Ania, Sauk, AG-37, and Jao fall into a deadly trap, and Sauk makes a discovery about a disappearing planet. Can they escape with these secrets and their lives?

Corrina Bechko and Gabriel Hardman have created a comic book with such dense character drama, superb character development, intricate politics, and intense plotting that it reads like a Star Wars novel… after only four issues! This is Star Wars as George Lucas and Lawrence Kasdan imagined it.

Posted by Leroy Douresseaux at 6:56 AM