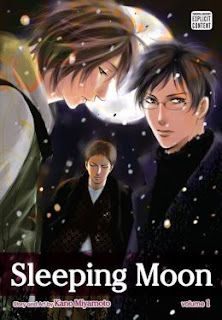 Kano Miyamoto is a prolific creator of boys’ love manga and of independent or amateur comics (doujinshi). Sleeping Moon is a yaoi manga graphic novel series from Miyamoto. Yaoi manga is a subset of boys’ love manga (BL) and features explicit depictions of sex between male characters. The series follows a college student trying to unravel a family curse.

Sleeping Moon, Vol. 1 introduces 27-year-old college student, Akihiko Odagawa. He returns to his family’s ancestral home in order to solve the mystery of a rumored curse that brings early death to the male descendants in his lineage, the Sakaki Family. There, he meets his Aunt Akiko and her two children, twin brother and sister, Ren and Eri.

Eri remains mostly unseen because she has some kind of illness, and though he is distant at first, Ren begins to make moves on Akihiko. That isn’t the most shocking thing. While in the home, Akihiko experiences a time slip that takes him back 100 years in the past. There, he meets student, Eitarou Shinjou, who looks strikingly like Ren. Can the two men bridge time to unravel a family curse?

Not really sexual in terms of content, Sleeping Moon, Volume 1 is a supernatural mystery. There really is not a strong current of romance, for that matter. Instead, it is ghosts plus time travel; that can be an interesting combination, and it is here. The ghosts and spirits are especially creepy and menacing, and, in the early chapters, Kano Miyamoto teases them just enough to string the reader along with sightings and dark auras to stir the echoes of fear.

There is something oddly sweet about the time travel angle. This is a mysterious and less sci-fi kind of time travel. It is impressionistic and spiritual; therefore, this kind of “time slip” seems earthier than the usual future-tech histrionics. Yes, I do want more sex scenes in the next volume, but I also want to solve the mysteries of this engaging manga. Readers looking for romance, mystery, and the supernatural will want to try Sleeping Moon.

Posted by Leroy Douresseaux at 6:32 AM