I Reads You Review: Hellblazer #300 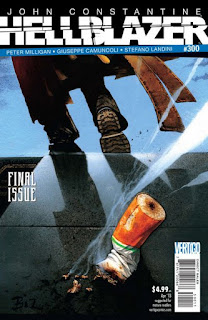 With a cover date of January 1988 and cover price of $1.25, Hellblazer #1, starring John Constantine, debuted in late 1987. The creative team was writer Jamie Delano and artist John Ridgway. A little over 26 years later, the final issue of the series, Hellblazer #300, arrives with a cover date of April 2013 and a cover price of $4.99. The creative team is writer Peter Milligan and artists Giuseppe Camuncoli and Stefano Landini.

I remember reading an interview of Alan Moore (but I can’t remember which magazine), in which Moore stated that he’d created Constantine because of a request from Stephen R. Bissette and John Totleben, the artists on The Saga of the Swamp Thing. Like me, Bissette and Totleben were fans of the rock band, The Police, and they expressed a desire to Moore that they wanted to draw a character who looked like Sting, the lead singer and primary songwriter of the band.

Over the years, Constantine went from being a “supernatural advisor” and crafty sorcerer to a magus, occult detective, troubleshooter, and jack-of-all-trades slash supernatural go-to-guy. Along the way, he remained a popular and beloved character, and now, he’s dead, or at least his comic book series, Hellblazer, is, replaced by the new mainline DC Universe comic book series entitled Constantine.

Hellblazer #300 opens with Epiphany, John Constantine’s wife, in a state of extreme distress over John’s death, but wait! Isn’t that John walking into her apartment? No, it’s Finn, John’s chip-off-the-old-block nephew, and if you can’t have the real deal, have the related deal. Julian the shape-shifting demon and the Fates (doing the just checking up on Constantine-is-dead thing) enter the picture. There is also a settlement in the affairs of Constantine’s father-in-law, Terry Greaves. Plus, Chas stops by, and Constantine’s niece, Gemma, gets to make the final play.

I make infrequent visits to the closest comic book shop. I also receive numerous review copies (hard copies and PDFs), so I always have a comic book, graphic novel, or book to read. Hellblazer was not on the top of my list of priority reads, so Hellblazer #300 is the first time in over four years, at least, that I’ve read an issue of Hellblazer. I was only a little disappointed and upset upon hearing that DC Comics was ending Hellblazer and re-launching the title. What could I do about it? Did I honestly think Hellblazer would run another 26 years to reach issue #600? Would that even matter to me (or would I be around to care)? Please, take these as rhetorical questions or accept “yes” as the answer to all of them: you choose.

Like just about anything Peter Milligan writes, Hellblazer #300 is interesting. As I followed Milligan twist and turn his way to a resolution for this last Hellblazer story arc and for the series as a whole, I found myself more engaged, even a little enthralled. I just had to see how it all ended. Honestly, I wasn’t really engaged by Giuseppe Camuncoli and Stefano Landini’s art, but their graphical storytelling certainly captured the pop-voodoo vibe Milligan put into this comic book. You will either love or hate the ending, or maybe be perplexed.

Essentially, this is the end of the John Constantine that Moore, Bissette and Totleben introduced and to which numerous other writers, artists, and editors contributed, added, changed, etc. Perhaps, this is the way that Constantine should leave us – perplexed. It’s only fitting for so crafty a fellow.

Posted by Leroy Douresseaux at 4:55 AM