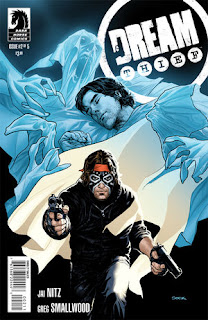 Lincoln is an Atlanta-based carouser and pot-smoker/connoisseur. He tends to get drunk and wake up in strange places; often those places are the bedrooms of women who are not his girlfriend, Claire. After a visit to the Fernbank Museum of Natural History, John awakens, wearing an Aboriginal mask he stole from the museum. Now, John’s problems have been replaced by blood stains and an unsteady memory that suggests he’s been disposing of bodies. He’s even killed his girlfriend.

As Dream Thief #2 opens, John is still trying to deal with the spirits of the dead who possess his mind and body while he sleeps. Now, he has a head full of another dead man’s memories, a young man named Jimmy Oliver. Tossed out of the U.S. Army for being gay, Jim found love and a career in the grungy underworld of drugs and pornography. Now, the Dream Thief has to enter that world on a vengeful errand.

When Dark Horse Comics made a PDF of Dream Thief #1 available to reviewers, I read it on a lark because it was a first issue. That was a moment of fortune in my life as a comic book reader. Dream Thief is just a damn good comic book and a great read.

Jai Nitz has written a fine, creepy dark fantasy, and he has an engaging character in John Lincoln. Lincoln is even better as the “Dream Thief,” whom Nitz uses, in this issue, to tell a poignant story of a young man lost. Dream Thief is partly a lovely character story, one that recalls Neil Gaiman’s The Sandman.

The scope of the talent of artist Greg Smallwood expands, practically with each page of this series. He draws Dream Thief as if it were a crime comic book, but he also captures the supernatural-infused nature of the narrative. I don’t think anyone could do a better job with Dream Thief than Smallwood is doing.

Comic book readers looking for excellence have a dream lover in Dream Thief.

Posted by Leroy Douresseaux at 6:19 AM