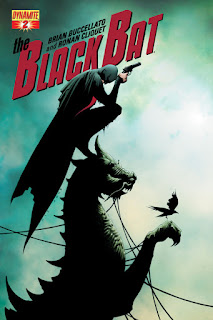 “The Black Bat” was a character that appeared in Black Bat Detective Mysteries, a short-lived, 1930s pulp magazine, published for six issues. The first Black Bat is thought to have had an influence on The Batman, either through Bob Kane (the man solely credited with creating Batman) or Bill Finger (the first Batman writer and essentially the co-creator of the character) or both. There was also a second version of The Black Bat, influenced by the first.

Dynamite Entertainment recently returned this pulp hero from the 1930s to comics. Dynamite’s The Black Bat comic book stars Tony Quinn, a brash defense attorney for the mob who compromises his ethics for financial gain. When Tony refuses to commit murder, his gangster employers torture and blind him. It is a covert agency that rescues and gives Quinn a chance to make amends. Tony dons a cape and cowl and becomes the Black Bat in a quest of redemption to right the wrongs of his past

The Black Bat #2 opens with Tony as the Black Bat about to break up a drug shipment for the city’s drug lord, Oliver Snate. Tony’s baptism in fire becomes literal when a moral dilemma complicates the mission. Meanwhile, anger in the city continues to rise over the unsolved case of the missing policemen.

The first time I saw images of the cover art for The Black Bat #2, I was struck by how much it all looked similar to various Batman images and graphics. [I wonder how many times you can poke the lion that is DC Comics’ legal department?] Actually, instead of Batman, The Black Bat #2 reads like a blending of Doug Moench’s Moon Knight and Mike Baron’s The Punisher, and I rather enjoyed it.

Writer Brian Buccellato is more than competent, offering familiar “street level” comic book tales, with a character made interesting because his determination is matched by his ignorance. Ronan Cliquet is also more than competent as a graphical storyteller, and his composition and page design is nice. Cliquet’s art improves Buccellato’s script in terms of storytelling.

I liked The Black Bat #2. I might read future issues, but as I have access to digital review copies from Dynamite Entertainment, that declaration might be something of a cheat. Still, The Black Bat has promise.

Posted by Leroy Douresseaux at 7:50 AM