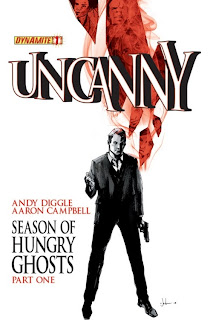 Season of Hungry Ghosts, Part One

Uncanny #1 introduces Weaver, a man born with an uncanny ability that allows him to steal other people’s skills. He can absorb their memories, abilities, and expertise and turn them into his own, but for only a short time. Weaver is a professional gambler, con-man, and thief-for-hire, and he prefers to look out for “Number One,” himself. When he tries to use his abilities at a casino card table in Hong Kong, he finds trouble that he did not expect. His only luck may be in the form of a mysterious young woman named Maggie.

After one issue, I’m not ready to pass complete judgment on Uncanny, but it is not bad at all. Uncanny #1 is a good read, slick and polished in its script. It reminds me of one of those espionage television series that were so popular and prevalent in the 1960s. Add some of Richard Stark’s Parker to that and you have Uncanny and its star, Weaver.

The art by Aaron Campbell yields good, if not spectacular graphical storytelling. Honestly, the art won’t “wow” you with prettiness or striking page design, but it is good, clear storytelling. So it would be a crime for readers who don’t mind some paranormal in their crime fiction not to try Uncanny.

Posted by Leroy Douresseaux at 5:28 AM