I Reads You Review: CYCLOPS #1 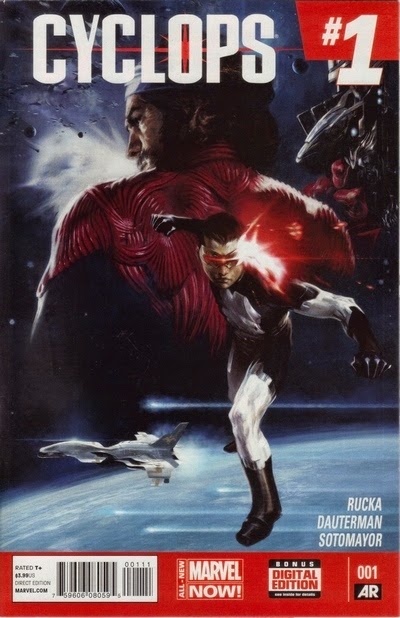 Marvel Comics’ “All-New Marvel Now!” initiative is offering a seemingly endless onslaught on new series.  This includes the launch of some X-Men solo comic book series featuring some of the most popular and iconic X-Men.  One of the X-Men getting his own comic book series is Cyclops, one of the original X-Men.  In fact, the star of the new comic book is a 16-year-old Cyclops… Let me explain.

All-New X-Men, written by Brian Michael Bendis, was one of the titles that came out of the original Marvel NOW publishing initiative back in autumn of 2012.  In this new X-Men comic book series, the modern, blue, furry Beast went back in time and met the original teen X-Men:  Cyclops (Scott Summers), Marvel Girl (Jean Grey), the Beast (Hank McCoy), Angel (Warren Worthington III), and Iceman (Bobby Drake), at a time when they’d only been the X-Men for a short time.  Grown-up Beast convinced teen Beast and his teammates to return with him to the present to see what had become of their dreams in a world that is our present and their future.  It wasn’t pretty.

Springing out of “The Trial of Jean Grey” event, Cyclops #1 finds 16-year old Scott Summers/Cyclops in outer space.  He is with the band of space pirates known as the “Starjammers.”  They are led by Scott’s once thought-to-be-dead father, Christopher Summers, now known as Corsair.  And the reunited father and son are about to embark on an epic father-son journey across the space ways.

The Starjammers were created by Dave Cockrum and first appeared in X-Men #107 (cover dated: October 1977).  The Starjammers were straight out of that venerable science fiction subgenre, space opera.  Comic books are no stranger to space opera, as many comic book companies in the 1940s and 50s used space flight to take human characters to strange worlds where they met even stranger beings.  Two of the best examples of space opera in comics may be Planet Comics, a science fiction comic book series published by Fiction House from 1940 to 1953, and also Weird Fantasy, which was published by EC Comics from 1950 to 1953.

This new Cyclops comic book is not hokey like some old science fiction comic books, but it might owe something to Star Wars, a film that has space opera elements and is considered by some to be space opera.  With that in mind, I think Cyclops could be a good thing.

What I am loving about Cyclops #1 right now is the art by Russell Dauterman (pencils and inks) and Chris Sotomayor (colors).  It is perfect for this juvenile space opera, and it looks so unique and different, as if Cyclops #1 was a slice of a European comics graphic album.  I want to see where writer Greg Rucka takes this, so I hope Cyclops runs for at least 12 issues.

Posted by Leroy Douresseaux at 7:07 AM