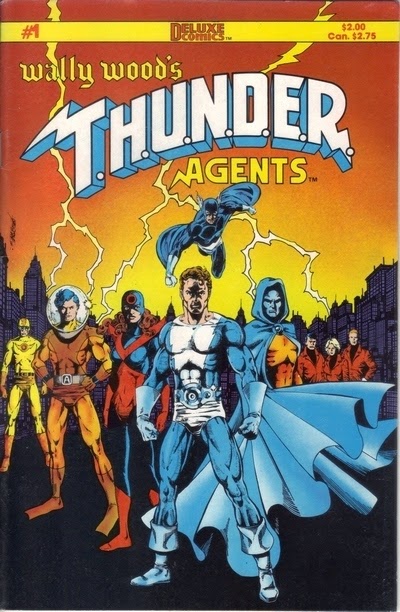 I have a soft spot for Wally Wood’s T.H.U.N.D.E.R. Agents because I genuinely liked the characters and Deluxe’s comic book series.  Most of all, I like this series because it introduced me to Wally Wood.  At the time I first read this series, I only knew Wood’s name through a small obituary printed in the back of Marvel Comics titles published a few months after Wood’s death in 1981.  [I don’t remember the comic book in which I first saw the obit; it may have been Marvel’s Star Wars.]

As it was in the original Tower Comics series, T.H.U.N.D.E.R. is an acronym for “The Higher United Nations Defense Enforcement Reserves.”  This is a combination spy agency and international police force that deals with threats to Earth, from dictatorships to outlandish threats such as alien invasions.  The organization also helps with natural disasters.  Some agents are given mechanical devices, including what is called a “Super Suit,” that gives them limited super powers.  These agents are known as “Super Agents.”  Agents without super powers are part of the T.H.U.N.D.E.R. Squad.

Wally Wood’s T.H.U.N.D.E.R. Agents #1 is a quasi-anthology comic book.  It opens with two short stories; one focuses on a Super Agent (The Raven) and the other on a potential new Super Agent who has possession of a former agent’s Super Suit (Menthor).

The first story, “Code Name: The Raven” (written by Dann Thomas and drawn by George Pérez and Dave Cockrum) finds the titular hero soaring over the sheikdom of Bahrain.  His destination is a club called “The Falcon’s Roost,” where he has an interesting encounter with the host, Abu Jahl, and a dancer known as “Phoenicia.”

In the second story, “A Change of Mind” (written by Stephen Perry and drawn by Keith Giffen and Rick Bryant), we meet Connie, the young woman who now possesses the helmet of the deceased Super Agent, Menthor.  Some part of John Janus, the original Menthor (who died early in the first T.H.U.N.D.E.R. Agents series), his spirit or consciousness, remains in the helmet.  Now, Janus taunts Connie as she pursues Eddie, a vicious hood who calls himself the “Prince of the Streets.”

Wally Wood’s T.H.U.N.D.E.R. Agents #1 is a comic book that is definitely of its time.  As a story, it reads like the kind of 1980s reboot that existed before Alan Moore’s reboots and re-imaginations of such series as Swamp Thing and Marvelman.  Once Moore’s work began to take hold of comic book readers’ imaginations, it also began to fundamentally change comic books.  Wally Wood’s T.H.U.N.D.E.R. Agents reads like a comic book that could have been written by the top-tier writers and writer/artists of the early to mid-1980s, such as John Byrne, Chris Claremont, Marv Wolfman, and Walter Simonson to name a few.

In that context, this comic book is still a joy to read three decades later.  Wally Wood’s T.H.U.N.D.E.R. Agents #1 is quaint, but not corny.  Still, I could not help but read it and think of what someone like Warren Ellis could have done with T.H.U.N.D.E.R. Agents in the mid to late 1990s or even today.

The T.H.U.N.D.E.R. Agents’ existence as an actual comic book series has been so sporadic over a 50-year period.  Thus, the concept has not endeared itself to a large enough group of readers to sustain it as a long-running series.  It is essentially stillborn, and I doubt that its admirers are large enough to even be referred to as a cult.  Nostalgia won’t sustain the T.H.U.N.D.E.R. Agents.  Still, I wonder how long Deluxe Comics’ version would have lasted had a lawsuit not ended it.

As much as I have written in this review/article about Wally Wood’s T.H.U.N.D.E.R. Agents #1, I surprisingly cannot find the words to talk about the art in this issue, from storytelling to pinups.  I have been a fan of almost every artist in this comic book, at one time or another.  I think George Perez, Keith Giffen, and especially Dave Cockrum are the standouts.

Cockrum is a quintessential superhero comic book artist because his graphic style, his compositions, and his storytelling lend themselves to comic book storytelling.  Cockrum, who passed away a decade ago, could take all the weird visual elements of superhero comics:  the costumes, settings, people, creatures, and beings and then, normalize them so that weird fantasy became soap opera with fantastic elements.  Cockrum’s storytelling is poignant and dramatic although he does not have a dazzling, showy style.

Luckily and thanks to eBay, I found Wally Wood’s T.H.U.N.D.E.R. Agents.  I look forward to reading more, and I wish this series had had a longer run.


The text is copyright © 2014 Leroy Douresseaux. All Rights Reserved. Contact this site for syndication rights and fees.


Posted by Leroy Douresseaux at 11:27 AM