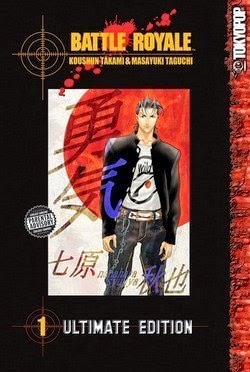 The Battle Royale media franchise began life as the novel, Battle Royale.  It was written by Konshun Takami and published in Japan in 1999 by publisher, Ohta Shuppan.  Some audiences know Battle Royale for the controversial 2000 Japanese film adaptation that has gained cult status in the United States.

In the TOKYOPOP adaptation of the original magna, Battle Royale is set in an alternate timeline in which Japan is a police state.  There, the government sanctions a television game or reality show called “The Program.”  This show pits school students against one another in a kill or be killed scenario.  And only one student can survive and win!

Battle Royale Ultimate Edition, Vol. 1 (reprinting Battle Royale Vols. 1-3) introduces readers to Class B-9th Grade at Shiroiwa Junior High School.  These 42 students (21 boys and 21 girls) are gassed during a bus trip.  They awake to find themselves marooned on an island and forced to kill one another until only one survives – the winner.  They are goaded and warned of the extreme rules of “The Program” by its ruthless and mysterious game master, Yonemi Kamon.  Collars rigged with explosives around their necks will keep the students honest.

Weapons are handed out and each student is sent out into the island alone; before long many students are turning against each other and committing the most brutal acts of murder.  Amidst the carnage, however, established friendships and love relationships take hold, while new bonds are forged.  Out of the chaos, seven figures take center stage.  The righteous Shuuya Nanahara and the gentle and caring Noriko Nakagawa join a hardened veteran of a previous stint on “The Program,” Shogo Kawada.  Hacker Shinji Mimura takes the battle against the captors to cyberspace.  Some seek an alliance with the kind-hearted kung fu master Hiroki Sugimura, while the troubled bad girl, Mitsuko Souma, and the cold, merciless Kazuo Kiriyama kill at will.

I saw the Battle Royale film before I ever read the manga, and though the film’s violence is alternately bracing and cathartic and sickening and troubling, it’s not the most disturbing film I’ve ever seen (De Palma’s Scarface, Ken Russell’s The Devils, and Larry Clark’s Kids, among others).  Still, the Battle Royale movie didn’t prepare me for how shockingly and brutally violent the Battle Royale manga is.

Film critics often attack horror movies for not having good characters; their reasoning is that if the viewers care about the characters, then, the horror of their violent murders will affect the viewers that much more.  In his adaptation of Battle Royale, manga-ka Masayuki Taguchi is exceptionally good at getting you to take these characters into your minds (if not hearts), and then making you suffer their often gruesome fates.  The idea of placing humans in situations outside of civil society and civilization and watching them turn to murderers is not new, even when the characters are all children.  But there’s nothing quite like the horror of the teen-on-teen murder (and occasional explicit sex and sexual assault) of Battle Royale.

Battle Royale Ultimate Edition Volume 1 is like a comic book version of a DVD.  It contains essays and new and previously unseen art.  This book has a weapons dossier written by Eliot R. Brown, who wrote the specifications for weapons, armor, and equipment that appeared in titles published by Marvel Comics.  Readers will like this added material as nice extras to go with the excellent manga.

Posted by Leroy Douresseaux at 8:47 AM