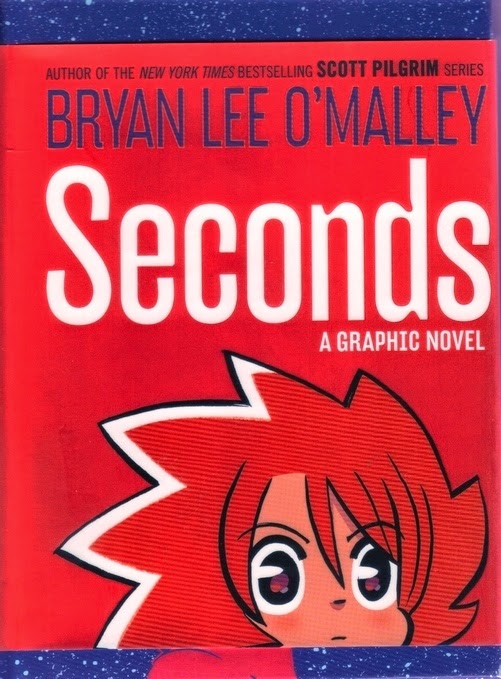 Born in Canada, Bryan Lee O’Malley is a cartoonist and comic book artist and letterer.  He is best known as the creator of the bestselling graphic novel series, Scott Pilgrim, which began in 2004 with Scott Pilgrim’s Precious Little Life.  The series was adapted into the 2010 film, Scott Pilgrim vs. the World (directed by Edgar Wright).

O’Malley’s first original graphic novel since Scott Pilgrim ended is entitled Seconds.  A full-color, hardback (6.2” x 8.2”), Seconds was just released by Ballantine Books (a division of Random House).  Seconds is the story of a talented young chef who misuses the magic that allows her to correct a blunder.

Seconds focuses on Katie Clay.  She is 29-years-old, and her 20s have been very good to her.  Once upon a time, she opened a restaurant with some friends; named “Seconds,” the place was successful.  Four years later, though, Katie is ready to move on and open a new restaurant, and she wants to name it “Katie’s.”  She has even found what she thinks is the ideal location, an old building that seems to have a magical charm about it (at least to her).

All at once, however, progress on the new location bogs down.  Seconds still calls to her – it doesn’t help that she lives in a room above the restaurant.  Her ex-boyfriend, Max, starts showing up again.  Katie is having a fling with Andrew, the 25-year-old chef she chose to replace her at Seconds, but that relationship seems to be souring.  Then, Hazel, a gorgeous young waitress at Seconds, is hurt in an accident caused, in some measure, because of Katie’s actions.  Katie’s life seems not to be so very good anymore.

If only she could have a second chance…

A mysterious girl named Lis suddenly appears in Katie’s room in the middle of the night.  Lis has simple instructions that will magically allow Katie a second chance to change a bad thing that happened into something much better.  And it works!  The problem is that Katie is only supposed to use that magic once.  Katie’s drive to fix everything will take her down the road to hell.

I am a huge fan of filmmaker Guillermo del Toro, and I have enjoyed the work of cartoonist and comic book creator/theorist, Scott McCloud.  I received a review copy of Seconds from Ballantine Books, and it came with a one-page press release for the book that included one-line quotes from both Del Toro and McCloud.  I don’t know if they actually read Seconds in its entirety or just parts of it, but neither of quotes conveyed what a truly unique comic book Seconds is.  With that said, let’s see if I can do some conveying.

Ever since I first came across the phrase “great read” in a book review I have used it in many of my reviews to let the reader know what fun I had reading a particular book.  Seconds is a great read.  I found myself going back over many pages, which is why I am a little late with this review.  Seconds is the kind of graphic novel that keeps me reading comic books, knowing that this medium can and does deliver unique and rewarding works like this.  Seconds is exemplary of that kind of supremely entertaining and imaginative work that only comic books can do.

Seconds is an uncanny mixture of magical realism and the fairy tale.  It is as if Bryan Lee O’Mally makes Katie’s story both a realistic drama and a Grimm-like cautionary, timeless in that it can be retold for any period.  Thematically, Seconds is about regret, the cycle of creation and dissolution in relationships, the ambivalence of change, and the yearning for supernatural (especially if it can solve our problems), among others.

The story suggests that trying to exert total control of the perceived chaos in our lives only brings actual terrible chaos instead of order.  Katie’s frantic desire to fix every problem, blunder, setback, etc. seems to make her more frantic.  The chaos that ensues drives this narrative, making it simmer like a potboiler.  It’s fun for us, but not for her.  Still, Seconds is more than just a thrill ride through Katie’s mounting problems.  It is also a funny, beautiful, and haunting examination of the human desire to make things work out just the way we want them to be.


Posted by Leroy Douresseaux at 8:27 AM