I Reads You Review: SAVAGE HULK #1 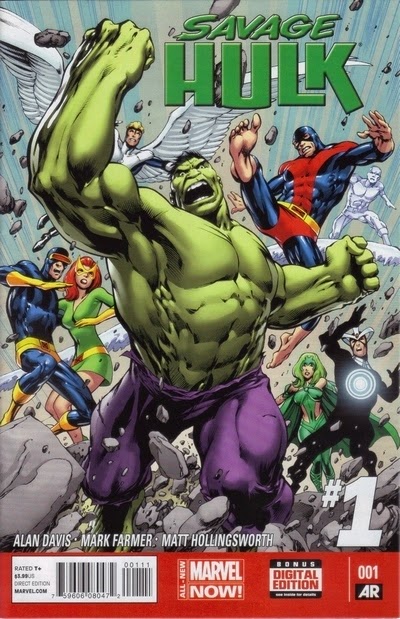 Savage Hulk’s first story arc is being produced by a comics creator who truly can be called a “superstar,” veteran writer, artist, and writer/artist, the great Alan Davis.  Davis is writing and penciling Savage Hulk with his longtime collaborator, Mark Farmer, inking his pencils.  To start things off with an incredible Hulk bang, Davis is teaming the Hulk with a group of characters that are familiar to Davis, the X-Men.  Davis is essentially writing a sequel to X-Men #66 (cover dated:  March 1970), which featured the original X-Men against the Hulk.

Savage Hulk #1 (“The Man Within”) recaps a battle between the Hulk and the X-Men: Cyclops, Marvel Girl, Angel, Beast, and Iceman.  The X-Men needed the help of Bruce Banner, the Hulk’s alter ego, to bring their teacher and leader, Professor Charles Xavier out of a coma.  They succeed in getting a device from Banner that helps Xavier; now, the Professor wants to return the favor and help Banner.

Joined by Polaris and Havok, the X-Men return to the last place they saw Banner.  However, long-time Hulk nemesis, The Leader, has been monitoring the actions of Hulk and the X-Men.  Now, he is ready to launch his latest diabolical scheme against the Savage Hulk.

My review of Savage Hulk #1 is this:  I like Alan Davis.  I enjoy the clean, straight-forward way that Davis tells superhero stories with a mix of soap opera and the kind of weird fantasy that is unique to comic books.  Thus, I thoroughly enjoyed Davis’ Savage Hulk #1.  I’m ready for the next issue, and I wish someone at Marvel Comics would encourage Davis to do more comics starring the original X-Men.

Posted by Leroy Douresseaux at 8:04 AM