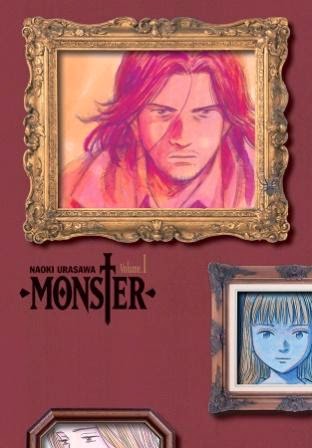 Monster is a seinen manga (comics for adult men) written and drawn by Naoki Urasawa.  It was originally serialized in Japan in the manga magazine, Big Comic Original (published by Shogakukan), from December 1994 to December 2001.  From February 2006 to December 2008, VIZ Media published Monster in 18 paperback graphic novel editions (known as tankōbon in Japan).  Now, VIZ Media is collecting the series in a new “Perfect Edition” format in which two graphic novels are gathered in each oversized paperback volume.

Naoki Urasawa’s Monster focuses on a young and very talented doctor who discovers that no good deed goes unpunished.  Dr. Kenzo Tenma moved from Japan to Germany to find success as a brain surgeon.  As the go-to-surgeon at Eisler Memorial Hospital in Düsseldorf, Tenma is the hospital’s golden boy.  However, it comes at a cost.  Tenma writes the medical papers that hospital director, Dr. Heinemann, presents as his own work.  Kenzo dates Heinemann’s daughter, Eva, but she is a spoiled daddy’s girl who cares more about appearances and material wealth than other people.  Then, Tenma makes a decision that leads to his fall from grace with Heinemann.

Tenma is determined to prove that he made the right decision.  So when two children come into the emergency room at Eisler one night, Tenma operates on Johan Liebert, the brother who has been shot in the head.  Johan’s sister, Anna, is in shock, but Tenma is determined to protect them both.  Tenma does not realize that his decision will force him to confront questions of good and evil.  Years later, he discovers a bizarre series of serial murders, and Tenma realizes that he may have saved a monster.

The Monster manga by Naoki Urasawa is one of the best comics published in the last decade of the 20th century.  Urasawa’s acclaimed manga may even be the best.

Monster can best be described as a psychological thriller, in which the central conspiracy expands ever outward.  Although the hero, Dr. Tenma, initially believes that all he has to do is find a serial killer, he gradually discovers that he must investigate history as well as track a killer.  Of course, Monster is a murder mystery, and there is plenty of political intrigue, some of it involving workplace politics.

Whatever genres and styles upon which it touches, Monster is a riveting, absorbing read.  It is a chilling story in which the monsters are not of supernatural origins, but instead come from the dark recesses of the human mind.  Monster is such an engrossing, page-turner that it is unforgettable.  I never forgot it, and I am ready to read it again – thanks to Monster: The Perfect Edition.

Posted by Leroy Douresseaux at 7:09 AM