I Reads You Review: George R.R. Martin's A GAME OF THRONES #20 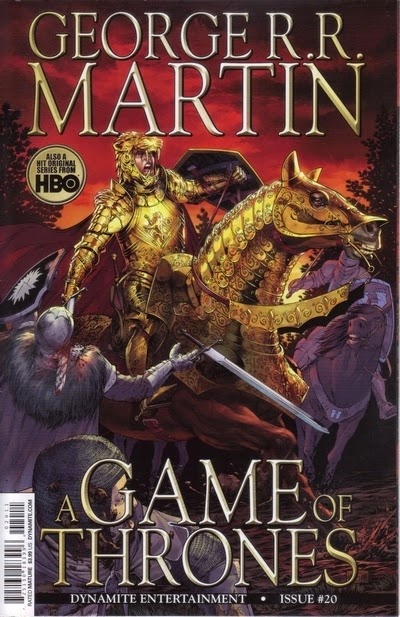 George R.R. Martin’s A Game of Thrones #20 opens on the battlefield of the Khals.  Khal Drogo and his warriors (Khalasar) have defeated Khal Ogo and his son, Fogo.  Now, Drogo’s Khalasar begins the pillaging, because to the victor goes the spoils.

Daenerys (or “Dany”) of the House Targaryen is Drogo’s “wife” (his “Khaleesi”).  Astride a horse, Dany makes her way through fields of the dead and witnesses that other thing that goes to victors, the raping of the women.  But Danys is having none of that, as she saves the women.  This is how she asserts her authority within Drogo’s Khalasar and her power over her husband.

Meanwhile, at the Wall, Jon Snow, bastard son of Lord Eddard Stark, wonders about the status of his family, especially the fate of his imprisoned father.  Meanwhile, Lord Mormont, sort of a mentor to Jon, has a special gift for him.  Maester Aemon also has many things to tell young Jon, including information concerning the House to which Aemon belongs.

Prior to reading A Game of Thrones: The Graphic Novel: Volume 1, I was not familiar with the novel, A Game of Thrones, although I had heard of it and the television series adaptation.  I am thankful to Bantam Books (a division of Random House) for sending review copies of the graphic novels.  They were my introduction to what has been a wonderful reading experience.

Dynamite Entertainment and Daniel Abraham and Tommy Patterson have done a brilliant job in producing this comic book series.  The adaptation is so sturdy and well-conceived that each 29-page chapter seems like a 58-page installment.  The depth and detail make me think that I am reading a graphic novel with each issue.  George R.R. Martin’s A Game of Thrones #20 makes me hope that this adaptation continues after issue #24.

Posted by Leroy Douresseaux at 9:32 AM