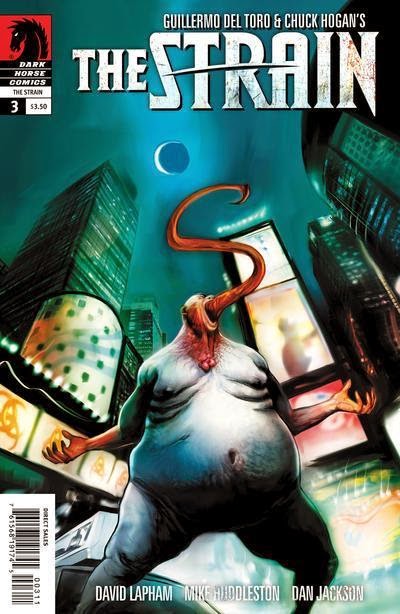 I have previously posted my reviews of The Strain #1-2 on this, the “I Reads You” blog.  Over the course of the coming weeks, I will post the reviews of issues 3 to 11 on this blog in conjunction with the airing of “The Strain,” the television adaptation of the original novel.  The first episode debuted on Sunday, July 13, 2014 on cable channel, FX.

The Strain’s central character is Dr. Ephraim “Eph” Goodweather of the CDC (Centers for Disease Control).  Eph heads the Canary Project, a rapid-response team that investigates biological threats.   With his second-in-command, Nora Martinez, Eph may have found such a threat at J.F.K. International Airport in New York City, where a Boeing 777 went dead silent after landing.

As The Strain #3 opens, elderly Professor Abraham Setrakian noisily confronts Eph and Nora, warning of the coming abomination.  Unlike the characters in so much of horror fiction and storytelling, Eph and Nora pay attention to the warnings… somewhat.  They may be just a little late to stop the supernatural disaster.  Two of the survivors of the Boeing 777 are exhibiting strange behavior.

If The Strain maintains the level of quality that permeates this third issue, I’ll run out of good things to say by the time I get to issue #11.  The Strain #3 is f’ing awesome.  The Strain is the great horror comic book that the original 30 Days of Night should have been.

Posted by Leroy Douresseaux at 1:23 PM