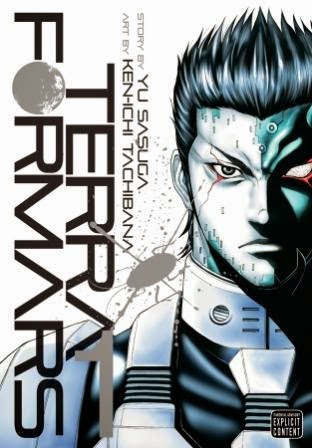 Artist Ken-ichi Tachibana first collaborated with writer Yu Sasuga on Terra Formars, which was also Sasuga’s debut as a manga writer.  Now, Terra Formars is the latest title from VIZ Media’s VIZ Signature imprint.  Illustrated by Tachibana and written Sasuga, the manga concerns the terraforming of Mars and the horror that unleashes.

Terra Formars opens in the year 2599 AD.  Overpopulation on Earth has reached the breaking point, and humanity must find new frontiers and a new home.  For centuries, Earth has been terraforming Mars by introducing moss and cockroaches.

Terra Formars, Vol. 1 (Chapters 1 to 6) opens after humanity’s first manned mission to the Red Planet, “Bugs 1,” was lost.  Now, “Bugs 2,” the second expedition, arrives on Mars with a crew of 15 men and women.  These explorers prepare to exterminate the cockroaches that were used to transform the Martian environment.

However, they discover that the insects have mutated or evolved into giant, aggressive humanoids creatures – a race of roach men.  These creatures apparently have one overriding goal; that is to exterminate all humans.  However, each member of the crew of “Bugs 2” has undergone the “Bugs Procedure.”  This terrifying and dangerous experimental surgery is designed to make each human something more than human.  But will that be enough for the Terra Formars?

In over a decade of reading and reviewing manga, I have come across some strange and even stranger manga.  The Terra Formars manga is stranger, shocking, and bizarre.  There are six chapters in Terra Formars Volume 1, and there are at least two or three shocking reveals in each one.

I don’t quite know how to describe it, but this first volume took me so many places in terms of plot that I want… no, I need to know what happens next.  I think Terra Formars will hold readers’ attention at least for the first two or three volumes.  It is definitely worth a look for fans of strange sci-fi manga.


Posted by Leroy Douresseaux at 7:01 AM