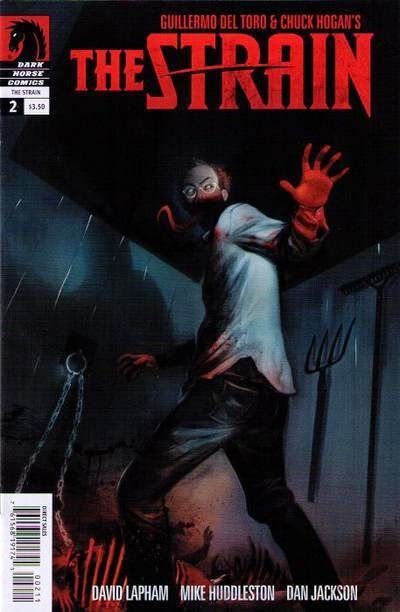 I have previously posted my review of The Strain #1 also on my “I Reads You” blog.  Over the course of the coming weeks, I will post the reviews of issues 2 to 11 on this blog in anticipation of “The Strain,” the television adaptation of the original novel.  The first episode is scheduled to debut on Sunday night, July 13, 2014 on cable channel, FX.  [By the way, Dark Horse reneged on that offer of the free trade paperbacks, at least to me.]

The Strain was a 2009 vampire novel from filmmaker Guillermo del Toro and novelist Chuck Hogan.  It was the first book in The Strain trilogy.  Back in 2011, Dark Horse Comics began producing a comic book adaptation of the first book, also entitled The Strain, with script adaptation by David Lapham and art by Mike Huddleston.

The central character of The Strain is Dr. Ephraim “Eph” Goodweather of the CDC (Centers for Disease Control).  Dr. Goodweather is the head of the Canary Project, a rapid-response team that investigates biological threats.  Goodweather and his second-in-command, Nora Martinez, may have found such a threat at J.F.K. International Airport in New York City.  That’s where a Boeing 777 went dead silent after landing, with window shades pulled down and all lights out.

As The Strain #2 opens, Goodweather and Martinez are examining a strange container that was found on the Boeing.  Does it have something to do with the 206 people found dead on the plane?  Meanwhile, the three people who were the sole survivors of the flight grow restless.  They are also useless to Goodweather and Martinez when it comes to solving the mystery of what happened on that flight.

New players enter the story.  Mysterious plutocrat, Eldritch Palmer, and the elderly Professor Abraham Setrakian head to New York City.  As the Big Apple prepares for a rare event, the Occultation, something deadly begins to claim its first victims.

This review comes over a year after The Strain #2 first reached comic book shops, but a horror comic book this good will be worth reading years after its publication.  Writer David Lapham delivers a page-turner that rages like the latest pot-boiler on the bestsellers list.  This tale grows more chilling and riveting with each scene.

Artist Mike Huddleston continues to deliver potent graphical storytelling, and his control over atmosphere grows with each page.  Yes, he’s still on the way to being a master of horror, and we benefit from it with a great horror comic book.  I am chomping at the bits to read the third issue of The Strain.


Posted by Leroy Douresseaux at 9:33 AM