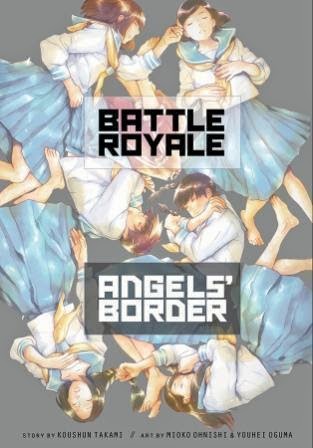 Battle Royale Angels’ Border is a stand-alone, one-shot manga set in the world of Battle Royale.  First published in 1999, Battle Royale is a Japanese horror and science fiction novel written by Koushun Takami.  In 2000, the novel became a manga that Takami produced with artist Masayuki Taguchi, who drew the manga.  A controversial film adaptation directed by Kinji Fukasaku was also released in 2000.

The book is set in the near-future in the Republic of Greater East Asia, a country that is like modern-day Japan, but has an authoritarian government.  The most graphic symbol of Greater East Asia’s controlling government is something called “the Program.”  Each year, an entire class of ninth grade students is kidnapped and dropped on an island.  There, the students are forced to kill each other until there is one survivor – the winner of the Program.  The original novel follows the 42 students (11 girls and 11 boys) of Shiroiwa Junior High – Ninth Grade Class B after they are chosen for the Program.

Battle Royale Angels’ Border features two episodes (or stories).  Episode I (drawn by Mioko Ohnishi) opens at the lighthouse.  The students from Shiroiwa Junior High scattered from the classroom where they received their orders and rules about the killing game that is the Program.  Yukie Utsumi and five of her friends:  Haruka Tanizawa, Yuka Nakagawa, Satomi Noda, Yuko Sakaki, Chisato Matsui lock themselves in the lighthouse.  There, they cling to a desperate hope of survival. The girls all trust each other, but they also know that only one can survive this killing game.

Meanwhile, Haruka struggles with her love for her friend, Yukie Utsumi, simultaneously wanting to touch Yukie, but skittish when Yukie touches her in friendship.  Haruka wants desperately for her and Yukie to survive, but complications and the arrival of others make one of the six girls very dangerous to the others.

Episode II (drawn by Youhei Oguma) focuses on two students from Shiroiwa Junior High – Ninth Grade Class B.  The story is set in November, six months before the kids from Class B are kidnapped into the Program.  Chisato, one of the girls who makes it to the lighthouse, is taking the train home when she has a confrontation with another passenger.  Suddenly, classmate Shinji Mimura comes to her rescue.  This popular boy and basketball star, practically sweeps Chisato off her feet, turning a train ride into something that might be called a date.

Honestly, I don’t have a lot to say about Battle Royale Angels’ Border.  I have not yet read Koushun Takami’s original novel, but I have seen the film adaptation, and I have read the first three volumes of the manga adaptation of the novel.  Both the film and manga contain depictions of extreme or graphic violence, including the depiction of a rape in the manga.

Battle Royale Angels’ Border is for teen readers, perhaps older teens; one reason being that the depiction of violence is not explicit.  Although it is teen appropriate, Angels’ Border is neither shojo nor shonen manga.  I think Angels’ Border’s two stories are essentially young adult (YA) stories set in the adult fiction/mature audience world of Battle Royale.  These stories blend teen love, unrequited love, LGBTQ love, but this is manga that is about young love and not so much about teen romance.

I do not know what fans of the Battle Royale novel, films, or manga will get out of these two interesting side stories.  I think teen readers will like them.  Think of Battle Royale Angels’ Border as Battle Royale toned down to the level of The Hunger Games…

Posted by Leroy Douresseaux at 8:57 AM