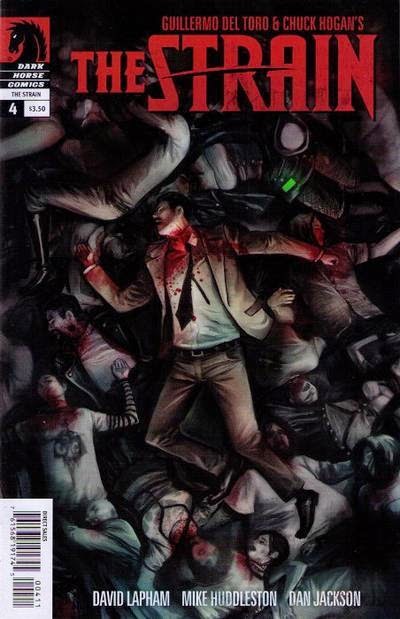 I have previously posted my reviews of The Strain, issues #1 through 3 on my “I Reads You” blog.  Over the course of the coming weeks, I will post the reviews of issues 4 to 11 on this blog in conjunction with the broadcast of “The Strain,” the television adaptation of the original novel.  The first episode aired on Sunday night, July 13, 2014 on cable channel, FX, with each new episode airing the following Sunday.

The Strain is the 11-issue comic book adaptation of The Strain, a 2009 vampire novel from filmmaker Guillermo del Toro and novelist Chuck Hogan.  Hogan’s 2004 novel, Prince of Thieves, became the Ben Affleck film, The Town.  Published by Dark Horse Comics, The Strain comic book is scripted by David Lapham, drawn by Mike Huddleston, and colored by Dan Jackson.

The Strain follows Dr. Ephraim “Eph” Goodweather of the CDC (Centers for Disease Control).  Eph heads the Canary Project, a rapid-response team that investigates biological threats.   With his second-in-command, Nora Martinez, Eph has found just that kind a threat.  It begins at J.F.K. International Airport in New York City, where a Boeing 777 went dead silent after landing.

The Strain #4 opens at the Stoneheart Group Headquarters in Manhattan.  There, CEO Eldritch Palmer begins to orchestrate his part in the madness that has already begun.  Eph’s son, Zack, witnesses something frightening.  Exhausted, Eph struggles to discover the secrets of what looks like an epidemic, while Nora comforts him.

Gabe Bolivar, rock star and survivor of the Boeing flight, gets a visit from his manager, Rudy, a visit that leaves the visitor stunned.  The wife of Ansel Barbour, another survivor, seeks comfort in “The Lord’s Prayer.”  Eph and Nora have a completely unexpected encounter with the third survivor, Captain Redfern.

The Strain #3 was f’ing awesome, and so is #4.  Artist Mike Huddleston has complete control of this narrative’s pace.  He draws out the coming horror in a measured pace that tries one’s nerves.  Could I take the heat?  Then, Huddleston unleashes brief action scenes that hit the viewer like a mean action movie.  Every one page of action feels like three pages.  Many media properties would be well served by a Mike Huddleston as their comic book artist.

Fans of horror comic books must have The Strain.

Posted by Leroy Douresseaux at 11:10 AM