I Reads You Review: SCOOBY-DOO, WHERE ARE YOU? #47 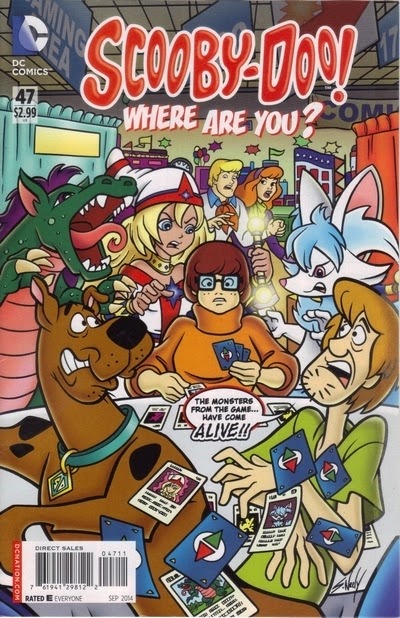 I recently received the latest issue of my Scooby-Doo, Where Are You? subscription.  I bought the subscription via a fundraiser held by my nephew’s school last year, which involved selling magazine subscriptions.

Scooby-Doo, Where Are You? #47 opens with “Comic Convention Card Tricks” (written by Sholly Fisch and drawn by Dave Alvarez).  Mystery Inc. is attending Mega-Pop Con (“The world’s largest gathering of pop culture!”).  Scooby-Doo and Shaggy are there for the comic books and the food, of course.  Daphne is looking to add to her collection of Fuzzies Dolls.  Fred wants to meet the star of his favorite science fiction television show, “Doc Whatzisname.”

Velma is at the convention to put her “keen strategic mind” to use in the “World Championship Tournament” of her favorite role-playing card game, “Monster Mania.”  But the gang’s fun is interrupted when monsters from Monster Mania come to life to plague the tournament.

“Night Marchers” (written by Michael Kraiger and drawn by Scott Neely) opens with Mystery Inc. in Hawaii so that Daphne can attend the “Conference on Polynesian Paranormal Phenomena.”  Of course, the gang can’t escape a mystery, especially after Shaggy and Scooby meet the ghostly procession known as the “Night Marchers.”

Scooby-Doo, Where Are You? #47 is unusual in that Velma is the spark in both the cases Mystery Inc. confronts.  The gang is at Mega-Pop Con and in Hawaii because of events in which Velma is participating.  Perhaps, this catches my attention because I am always curious about Velma beyond her place in Mystery Inc.  Who is she and what is her family like?  What are her hobbies?

Beside that, “Comic Convention Card Tricks” is a severely under-developed story.  Once again, it is one of those Scooby-Doo short stories that needed more space.  “Night Marchers,” which I’m assuming is the reprint story this issue (from Scooby-Doo #77), is a fun read, if for no other reason than its Hawaiian setting.

As a side note:  the setting of “Comic Convention Card Tricks” is Mega-Pop Con, which is obviously a stand-in for the legendary, annual San Diego Comic-Con International.  In conjunction with Comic-Con International 2014, Scooby-Doo, Where Are You? #47, in addition to the regular edition, comes with an exclusive Comic-Con variant cover edition.  Get yours if you can.


Posted by Leroy Douresseaux at 7:51 AM