I Reads You Review: HERCULES: The Knives of Kush 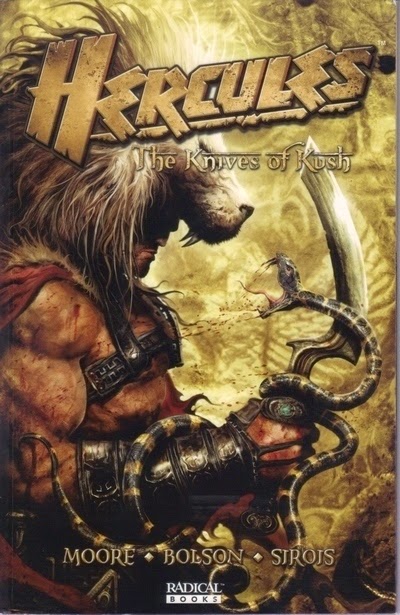 Moore made Radical’s Hercules grittier, while focusing more on his human side than on his heritage as the son of the supreme god, Zeus.  Moore set Hercules’ life in the Bronze Age and gave him a band of friends.  Together, Hercules and his band left Greece and sought mercenary work in other lands.  Thus, Moore set Hercules first mercenary activities in Thrace.  Radical’s Hercules is now a Paramount Pictures/MGM’s film starring Dwayne “The Rock” Johnson and directed by Brett Ratner.

However, the impending release of the movie made me dig up my copy of The Knives of Kush.  I decided to reread the story, as I had previously only read the fourth and fifth issue of the miniseries, and post a review of the trade.

Hercules: The Knives of Kush opens with Hercules and his band of mercenaries:  Autolycus, Iolaus, Meleager, and Atalanta (the only female of the group) aboard the Greek boat, the “Sea Nymph.”  After a brief skirmish with pirates, Hercules and company end up in Egypt.  They eventually offer their services to Pharaoh Seti II who is fighting a civil war against his half-brother, Amenmessu (real life historical figures that lived in the 13th and 12th centuries BC).

Amenmessu is aided by Khadis, Lord of Lighting and a sorcerer whose powers may be the reason Amenmessu seems to be winning the war with Seti.  Hercules suspects that there is more to Amenmessu’s success than Khadis and believes that traitors hide among Seti’s circle of wives, advisors, retainers, etc.  Hercules is appointed as a royal bodyguard, but he believes that to learn the truth he must penetrate the sinister cult known as “The Knives of Kush.”  This, however, will bring Hercules face to face with an enemy like no other – a mysterious figure who may wield the power of the gods.

I doubt that I am the only reviewer who thinks that Steve Moore has converted the demigod of Greek myth, Hercules (Heracles), into something that resembles the sword and sorcery character, Conan the Cimmerian (also known as Conan the Barbarian).  This is not a criticism; Moore apparently put a lot of effort into researching Greek myth and history for Hercules.  Besides, I like this Hercules.  I did not read The Thracian Wars, and Moore states in the foreword to this trade paperback that readers do not need to know of Hercules’ adventures in Thrace before reading of his adventures in Egypt.

I think that Hercules: The Knives of Kush slightly resembles some of the Conan comic books that Marvel Comics published in the 1970s and 80s.  In fact, The Knives of Kush has a good premise and plot, but the problem is the execution.  It is as if Moore wanted this miniseries to be any number of things or was not sure what it should be.

On one hand, Hercules’ struggles against Amenmessu’s rebellion involve courtly conflict and palace intrigue.  Moore basically has Hercules, an action character, stumbling around Seti’s Memphis, vainly trying to discover spies.  On the other hand, since Amenmessu is leading an armed rebellion, there is eventually going to have to be a big battle between Seti’s forces, to which Hercules belongs, and Amenmessu.  Instead of building up to the battles, the spy hunt seems like story padding.  Also, at five issues in length, The Knives of Kush is at least one issue too long.

In fact, for all the fear that Amenmessu and his ally, Khadis and the cult known as The Knives of Kush, are supposed to engender, their confrontation with Hercules and company is anti-climatic.  Their demises are pitiful, leaving this story with the sense that there was no great villain and with the disappointment that Hercules’ head-bashing comes in fits and starts.

The art produced by Chris Bolson and Doug Sirois is quite good, but the rest of it falls off.  If there is ever more of Radical’s Hercules, I hope Bolson and Sirois are the artists, and I hope for a story that has more head-bashing and disemboweling than it does character drama.  I want the next Hercules to be more like the last two issues of Hercules: The Knives of Kush than the first three.  Who really cares about Hercules’ daddy issues?

[This trade paperback includes an interview of Steve Moore conducted by Andre Lamar.]


Posted by Leroy Douresseaux at 1:00 PM