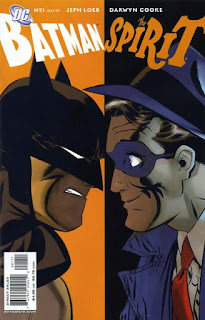 The Batman created by Bob Kane and Bill Finger

The Spirit created by Will Eisner

Batman/The Spirit was a one-shot, stand-alone comic book starring Batman and Will Eisner’s classic comic book character, The Spirit.  The comic book was released in late 2006, but has a 2007 cover date.  This crossover comic book is a collaboration between award-winning and celebrated creators, Jeph Loeb and Darwyn Cooke.  I reviewed it early 2007 as the 104th edition of my old “Mr. Charlie” column at the Comic Book Bin.

Here, is the classic review:

Sometime in the last few years or so, DC Comics obtained the rights to publish new comic books featuring Will Eisner's famous costumed hero, The Spirit.  As a prelude to the new series, DC presents Batman/The Spirit #1 with a script by Jeph Loeb and pencils by Darwyn Cooke (who will write and pencil the new Spirit title).  Entitled "Crime Convention," it tells of the first meeting of Batman (Bruce Wayne) and The Spirit (Denny Colt), which apparently happened several years in the past.  Robin is only 13 in the story.

The denizens of Batman's Gotham City and The Spirit's Central City come together in Hawaii for The Policeman's Benevolent Association's Annual Law Enforcement Convention.  Commissioners Gordon of Gotham City and Dolan of Central City are eager to take this working vacation.  What they don't know is that the convention is the epicenter of a diabolical plot with The Spirit's mysterious nemesis, The Octopus, as the mastermind.

Aiding him are such Spirit villains as P'Gell (who has seduced Commissioner Gordon), Carrion, The Vulture (and his pet vulture, Julia), among others.  From The Batman's rogue's gallery, many bad guys join the plot including The Joker and Harley Quinn, Catwoman, The Penguin, and Poison Ivy (who gains control of Commissioner Dolan through her poisonous kisses).  Gordon's daughter, Barbara (who apparently hasn't become Batgirl at this point), and Dolan's daughter, Ellen, also make small appearances.

Batman (and Robin) and The Spirit join forces in Hawaii to discover the details of plot and foil it, but first Batman and The Spirit have a small tussle.  It's after their first misunderstanding they find that with so many of their adversaries in town, they might have their hands full, so joining forces is the way to go.

Batman/The Spirit is like a love letter to both the creators and fans of these two venerable characters and their supporting casts and places.  Jeph Loeb's story is light, breezy, and moves fast - being more like Will Eisner's comix than what Bob Kane and Bill Finger did in their Batman comic books.  It should be no surprise that Loeb, who brought together the most prominent Bat-characters in the 12-part serial, Batman: Hush, does much the same thing in Batman/The Spirit, although in a lighter… spirit.  Still, the story is a bit dark.  There are murders committed in the background of this tale, and readers may interpret the scene in one panel to mean that Commissioner Gordon had sex with P'Gell, the long-time Spirit villainess.

The real treat here is Darwyn Cooke's art (with inks by J. Bone).  One of those artists with a "cartoony" style, Cooke worked on the popular "Batman: The Animated Series" television series.  Cooke draws a great looking Batman.  His art has a tone and style that captures the fun, B-movie, sci-fi spirit of DC Comics from the 1950's and 1960's.  Cooke displayed that so well in DC: The New Frontier, and his comic art for Batman/The Spirit looks like an untold tale set in the era of The New Frontier.  Cooke brings his own style to the table, though he references Eisner and also some of the Batman comic book artists who worked from the 1930's to the 60's without mimicking them.  You could say that he captures the spirit of those artists and those times.

I'd love to see Batman team up with The Spirit again, but only face one villain each from their respective rogue's gallery.  There are many other writers besides Loeb who could write this possible sequel, but if Cooke isn't available to draw it, hopefully DC will realize that the shortlist of artists who could do this project justice is indeed very short. [ENDS]

So that’s what I had to say about this comic book 7(!) years ago.  You can find the original version of this review at the following link: http://www.comicbookbin.com/batmanandthespirit2006.html

Posted by Leroy Douresseaux at 3:51 PM