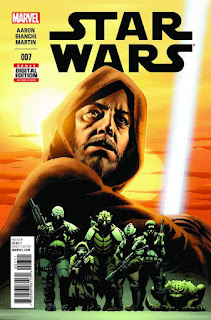 As far as I am concerned, the return of Star Wars to Marvel has been a wild success.  Perhaps, it is my childhood association with Marvel Comics as the publisher of Star Wars comic books.  Still, the three ongoing series (Star Wars, Darth Vader, Kanan: The Last Padawan) and the, thus far, two miniseries (the completed Princess Leia and the just started Lando) are a blast to read.

Star Wars #7 offers a one-off tale after the conclusion of its opening story arc, which saw Luke Skywalker find the journal of his old mentor, the former Jedi Knight, Obi-Wan Kenobi.  In Star Wars (1977), the original film, Obi-Wan was known as “Old Ben Kenobi,” that “crazy old wizard,” who lived out in the desert.  We learn very little of Ben “Obi-Wan” Kenobi in the original Star Wars trilogy.  In the prequel trilogy that began with Star Wars: Episode I – The Phantom Menace (1999), we learned much about Obi-Wan's latter days as a padawan and his time as a Jedi Master.

What is still mostly shrouded in mystery is the two decades Obi-Wan spent on the planet Tatooine as a Jedi-in-exile slash hermit.  Star Wars #7 brings to life an excerpt from Old Ben Kenobi's journal.  It tells that while he watched over the boy, Luke Skywalker, Obi-Wan yearned for more.  He struggled because his training had taught him to be active, not just some guy sitting and waiting.  Now, his impatience may cost him in regards to his most important task.

I did not expect much from Star Wars #7, although I have thoroughly enjoyed the work of writer Jason Aaron on this series.  However, series artist John Cassaday was apparently only going to draw the first story arc, and he is a big reason that I have enjoyed this series so much.  I don't particularly care for the work of artist Simone Bianchi, who stepped in to draw this story.

I must admit to being pleasantly surprised by Star Wars #7.  Aaron's story of hope, redemption, and courage feels true to the spirit of classic Star Wars.  Bianchi's overly stylish compositions have a sensibility that is not foreign to classic Star Wars; the art even recalls the kind of adventure illustration that influenced George Lucas in creating Star Wars.  Besides, Star Wars #7 has a cover by John Cassaday and colorist Laura Martin, which pleases me.

I am hoping for more excerpts from Old Ben Kenobi's journal.  I have a new hope that there are some exciting adventures to be told.

Posted by Leroy Douresseaux at 4:33 AM