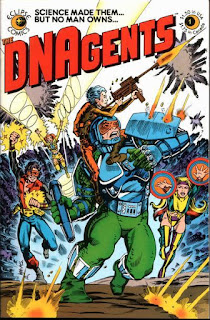 [This review first appeared on Patreon.]

DNAgents was a comic book series created by writer Mark Evanier and artist Will Meugniot.  For most of its run, DNAgents was published by Eclipse Comics, beginning in 1983 with the first issue.  DNAgents follows a team of superheroes comprised of a five young people that were created by a corporation using genetic engineering.

DNAgents #1 (“Born Orphans”) opens in the bowels of the Matrix Corporation.  There, we meet five individuals who are not quite people and are not human.  They began as “hundreds of beakers of chemicals waiting to interact.”

When they are freed from their stasis chambers, we are introduced to a new team of superheroes, who have code names instead of birth names.  Rainbow is a young woman who is a powerful telepath and an illusionist.  Amber projects disks of electromagnetic energy that she can use as shields and weapons, or as platforms upon which she can fly.  The beefy Tank is super-strong and wears heavy body armor to regulate and augment his strength.  A conceited young man, Surge can fire blasts of lighting.  A little guy, Sham is a shapeshifter with training as a commando.

The DNAgents are immediately sent on a mission, but things are not as the youngsters are told they would be.  Can they survive in a world that they only know by the information their corporate overseers programmed into them?

It has been ages since I read DNAgents, but for some reason, the series never left my memory.  I have always remembered it fondly, so during a Mile High Comics sale, I bought a copy of DNAgents #1.  I promptly lost track of the comic book, and when I found it, I decided to read it... and to write a short review of it.

DNAgents #1 is a comic book of its time.  It's quasi-science slash fictional science is not presented in a complex or detailed manner.  Writer Mark Evanier focuses on creating the dynamics of a team and on the relationships within the team and on their relationships with other people.  Evanier (pronounced Ev-a-near) emphasizes character relationships, as he also delves into the politics within the Matrix Corporation.  Evanier's script offers plenty of action, but also has a wry sense of humor.  It would not be a stretch to say that Evanier uses Chris Claremont's storytelling on Uncanny X-Men as a template.

Artist Will Meugniot (pronounced Mineo) is good at storytelling, and his page layouts are imaginative, tending towards dynamism.  His art is not highly polished, and is somewhat awkward, in the way one might expect of an artist that has not illustrated many comic books.  There are, however, many moments when Meugniot shows that he has strong drawing skills.

Looking over DNAgents #1 before I read it, I did not think that I would read more than this first issue.  Now, that I have read it, I want to read at least a few more issues.  I also think that this series has potential.  There are a number of writers currently working in comic books that can reboot, re-imagine, or even restart DNAgents in new and interesting ways.

Posted by Leroy Douresseaux at 8:34 AM