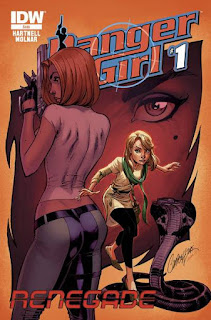 [This review was originally published on Patreon.]

Created by J. Scott Campbell, Danger Girl was one of the three inaugural comic book series that launched Cliffhanger, an imprint of the former Image Comics “house,” Wildstorm Studios.  Danger Girl #1 (cover dated: March 1998) introduced a group of female secret agents whose adventures were a mixture of Indiana Jones and James Bond.  In fact, Danger Girl’s young female stars were like Bond Girls, except that the girls were the ones getting to be James Bond in action.  Danger Girl focused on one girl in particular, Abbey Chase.

Scott Dunbier, the Wildstorm editor of the original series, has guided Danger Girl back to life in recent years via a series of miniseries published by IDW Publishing.  The latest mini is Danger Girl: Renegade, which is written by Andy Hartnell, drawn by Stephen Molnar, colored by John Rauch, and lettered by Neil Uyetake, with cover art by J. Scott Campbell.

Danger Girl: Renegade #1 opens with a prologue, set in Cairo, Egypt, 12 years before the main story.  Thirteen-year-old Abbey Chase is set upon by three men, but she proves more than capable of escaping them and leaving them in danger.  However, Abbey is a target because of her father, and men won't stop trying to kidnap her in order to use her as leverage against him.

Danger Girl: Renegade is apparently a miniseries that will reveal how Abbey Chase became who she is on the way to becoming a member of the super-secret spy organization known as “Danger.”  Danger Girl, since its beginning, has been lighthearted, superfluous entertainment, but it has been surprisingly good at being, lighthearted, superfluous entertainment.  Danger Girl remains Indiana Jones meets James Bond, more Roger Moore, even if the creators might have Sean Connery in mind.  As a comic book, Danger Girl is a narrative in which the graphical storytelling is dressed in pin-up illustration and good girl art.

Renegade does not change that the formula, and, once again, the result is a fun comic book.  I don't know what else Andy Hartnell has written in his time as a comic book writer, but I know that Harley Quinn and a few other “ladies of DC Comics” could use his deft comic touch.  Also, Renegade series artist Stephen Molnar makes sure readers don't miss J. Scott Campbell... too much.

Posted by Leroy Douresseaux at 4:50 AM