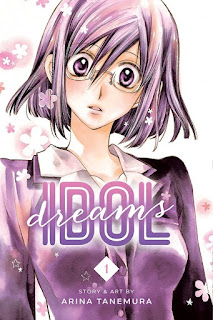 Idol Dreams is a shojo manga from mangaka, Arina Tanemura, the creator of such manga as Full Moon and The Gentlemen's Alliance †, to name just two of many.  A series for adult readers, Idol Dreams follows an ordinary office worker who becomes a teenager again and gets a shot at becoming a star.

Idol Dreams, Vol. 1 (Chapters 1 to 5) introduces Chikage Deguchi, an office worker who believes that she has missed out on love and success.  During her high school reunion, it is revealed that she is 31-years-old and is still a virgin.  Although she is humiliated, Chikage gets a chance to be 15-years-old again, thanks to high school friend, Tokita.  On her first day being a teen again, a chance at stardom comes her way, but is Chikage really ready to change... everything.

[This manga includes the bonus, “Arina Way of Manga.”]

In her cartoon essay, mangaka Arina Tanemura says that when she was trying to decide what her next project should be, a publisher asked her to create a “magical girl” manga for adult readers.  The result is the Idol Dreams manga.

Idol Dreams Volume 1 has a “T for Teen” rating, but the series, in many ways, is indeed for older readers.  Teen can certainly read Idol Dreams, but you have to have at least reached a certain age well into adulthood in order not just to understand, but also to feel Chikage's sense of regret about what could have been.  The smart thing that Tanemura does is that she immediately confronts the reader with this reality:  how many of us would really do things differently if given the chance “to do it all over?”

I have liked many Tanemura manga, but Idol Dreams is the first one that I have liked unconditionally after only one volume.  I am dreaming of the chance to read the next volume.

Posted by Leroy Douresseaux at 9:47 AM