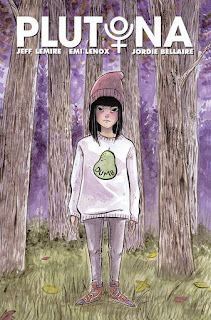 Plutona is a new superhero comic book series from Jeff Lemire (Descender) and newcomer Emi Lenox.  The series focuses on five suburban kids who make a shocking discovery in the nearby woods, the body of the world's greatest superhero.

Plutona #1 opens in a suburb of Metro City, a pastoral-like setting where the central characters live.  First, there is Teddy; he engages in an activity called “capespotting,” which involves watching the skies over Metro City and cataloging any superhero sightings.  Ray is his neighbor, who teases Teddy relentlessly, calling his “Teddy Tugger.”

Diane (called “Chubbs” by Ray) is a portly teen girl who likes to accessorize her clothes in order to make her fashion statements.  Mie is a teen girl whose fashion sense is grunge or some kind of post-grunge, and she hates being stuck taking care of her younger brother, Mike.  One afternoon, these five youngster make a startling discovery.

Image Comics describes Plutona as “heartfelt.”  Jeff Lemire and Emi Lenox share the “story” credit for this series, and the combination of Lemire's script and Lenox's art seem inseparable, which intensifies the emotional resonance.  Plutona does seem heartfelt, but I would prefer to describe it as engaging.  There was not a moment during my reading of this first issue when I did not want to read it.  Actually, I wanted much more Plutona.

In fact, the series does give more.  Plutona #1 ends with a four-page story written and drawn by Lemire that focuses on Plutona.  By day, she is a waitress at “Double Dipper Diner,” and by night, this single mom of a young daughter heeds the call to protect Metro City.  Wow, Plutona would make an interesting superhero comic book outside of this comic book.

I have to say that I felt more engaged and much more connected to Plutona #1 than I did to Descender #1, Jeff Lemire's Image Comic series (co-created by Dustin Nguyen) that was launched earlier this year.  I could not get myself to be interested in Descender past the first issue, but I can hardly wait for the second issue of Plutona.

Posted by Leroy Douresseaux at 4:36 PM