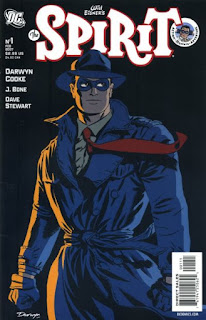 The Spirit created by Will Eisner

Beginning in 2007, DC Comics brought Will Eisner’s classic comics character, The Spirit, back with a new monthly comic book series, the first of two DC published over a five-year period.  The first 12 issues of the first series were written and drawn by acclaimed cartoonist and writer/artist, Darwyn Cooke.  I reviewed the first issue for the 105th edition of my old “Mr. Charlie” column for the ComicBookBin.

Here’s is that review:

In 1997-98, the now-defunct Kitchen Sink Press published eight issues of The Spirit: New Adventures.  It was an anthology title wherein a number of writers, artists, and cartoonists chronicled new, post-Eisner Spirit tales.  Over the course of those eight issues, Alan Moore wrote two stories:  an issue-length tale drawn by Dave Gibbons and a short story drawn by Daniel Torres.  Neil Gaiman teamed with Eddie Campbell.  Paul Chadwick and Paul Pope were two of the many artists who drew stories for the new series.  Perhaps, it was The Spirit: New Adventures that opened my mind to the idea of new Spirit tales from modern comic book creators.  I was saddened when Kitchen Sink Press troubles meant the cancellation of this series, and if I remember correctly, at least a nine issues was published.

Now, it’s DC Comics' turn to launch a new Spirit comic book.  When I learned that Darwyn Cooke would write and draw The Spirit in a new ongoing series, I instantly knew that I was likely going to like this book, and after reading the first issue, I look forward to #2, #3, #4…

I think I like this because so far it seems as if Cooke doesn't plan on making major changes to Will Eisner's famous costumed hero.  Even in this first issue, Cooke eschews "making the character his own," by transforming The Spirit into something else.  He's modernized the setting, the sets, and backdrops, but the characters are basically the same.  The plots are similar in style, but Cooke takes more pages to do what Eisner did in fewer pages (and need I say better).

The sole major change Cooke makes is to Eisner's lovable Sambo, Ebony White, The Spirit's "colored" sidekick for much of the 1940's.  The character, a thick-lipped, black kid who spoke the way many White people still think African-Americans speak (broken, minstrel English), remains hugely controversial.  Eisner apologists and/or racists defend Ebony's characterization as being acceptable at the time Eisner and others wrote Spirit stories (well, at least it was acceptable to White folks).  Now, Ebony is a sassy, young Negroid who spouts the kind of witty banter that might make him safe for The Disney Channel.  He's urban and hip-hop-ish, but not so dangerous that he couldn't date Raven of the Disney’s Channels’ “That’s So Raven.”

This first issue story, entitled "Ice Ginger Coffee" finds The Spirit racing to rescue a cable news network anchor.  Ginger Coffee (a light-skinned African-American type who blends Halle Berry and Gabrielle Union) has just been promoted to anchor of National News Network.  Her big expose to celebrate her rise is an interview of a mystery guest with insider information on the criminal organization of Amos Weinstock, aka "The Pill."  The Pill, whose obese body is covered in pustules that secrete flesh-dissolving fluids, has Ginger kidnapped.  It's The Spirit to the rescue, but Ginger, ever determined to break news, has found a way to give her audience an insider's view of her precarious situation, much to The Spirit's chagrin.  She may cost her and The Spirit their lives.

Cooke's art (inked by J. Bone) is a close relative of the style Eisner and his studio used on The Spirit back in the 1940's.  Dave Stewart's coloring is good, but comes across as a candy-coated version of Batman's dreary world.  The Spirit's world is vibrant and four-colored, and I'm hoping to see more of that in future issues.  In the meantime, I'm a satisfied fanboy and I'm curious about the future of this new series. [END]

So that’s what I had to say about The Spirit #1.  You can see the original version of this review at this link: http://www.comicbookbin.com/thespirit200701.html

Posted by Leroy Douresseaux at 4:16 AM