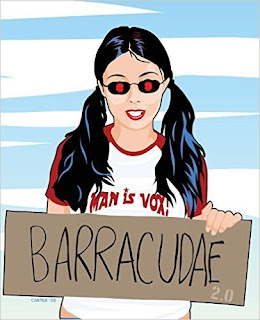 Published by Candle Light Press (CLP), Man is Vox: Barracudae is a 2003 original graphic novel (OGN) created by writer John Ira Thomas and artist Carter Allen.  The story follows a man who is essentially a killer on the search for a psycho who kills some women and abuses in terrible ways those that he does not kill.  Because of the resources and processes available to them at the time, Thomas and Allen were not able to see Barracudae published the way they intended it.

2015 is Candle Light Press' 20th anniversary.  In fact, there is a book celebrating that anniversary, CLP20: Twenty Years of Candle Light Press (http://candlelightpress.tumblr.com/clp20.htm), a book to which I have contributed a few notes.  For CLP, this anniversary provides an opportunity to re-release, re-present, and repackage some of its publications.

Man is Vox: Barracudae follows the trippy adventures of Tyson Gurst a.k.a. “The Fearsome Shade” a.k.a. “The Husband.”  Early in the story, a dying mobster tries to make a trade for his life (because Gurst is going to kill him).  The doomed criminal alerts Gurst to a bigger crime.  Traveling a state highway of gas stations and cheap motels, the Fearsome Shade will discover a conspiracy that ends with some of the most powerful good guys around.

Man is Vox: Barracudae is crazy.  John Ira Thomas is experimental and sometimes avant-garde, to the detriment of the narrative in a few places.  That said:  this comic book is unabashedly humorous, and, in its final act, it playfully skewers superhero comics, particularly the post-modern twisting of traditional superhero comics that started in the 1980s and continues to this day.  I like its ideas; truth and justice do come at a cost.  What do we really want from our saviors?  Do they really know what we want?

The text is copyright © 2015 Leroy Douresseaux. All Rights Reserved. Contact this blog for reprint and syndication rights and fees.

Posted by Leroy Douresseaux at 3:09 PM